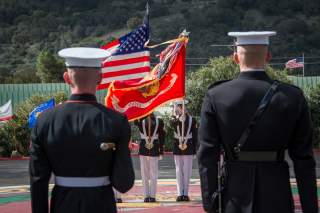 We were expecting to hear something like a sergeant major yelling, "Marines to be arrested: Center, MARCH!" but the real life version of what happened on Thursday when 16 Marines from 1st Battalion, 5th Marine Regiment were arrested was far less dramatic.

A viral Facebook post from a former Air Force service member claimed to have the story, which said that the sergeant major of the unit, Sgt. Maj. Matthew Dorsey, essentially faked an awards ceremony before having the Marines nabbed by NCIS. It didn't really go down that way, according to Maj. Kendra Motz, a spokeswoman for 1st Marine Division.

"It didn't happen that way at all," Motz told Task & Purpose on Friday. "There was no ceremony involved in that whole thing."

Instead, it was much more like a sergeant major holding a clipboard calling out names, Motz said. With his battalion of roughly 1,200 Marines in front of him, Dorsey rattled off the names of 16 Marines between the ranks of private first class and corporal. They then broke ranks and ran to the front.

"They lined up in front of the formation," Motz said. "Then once everyone was lined up, they were arrested."

There was no ceremony, nor red folders. It was just your garden variety mass arrest of more than a dozen Marines, intended to strike fear into everyone else's hearts to not do dumb shit, such as "alleged involvement in various illegal activities ranging from human smuggling to drug-related offenses," as the division said in its initial press release of the arrest.

Motz said none of the Marines who were arrested have yet been charged.

The arrest of the 16 can be traced back to the case of two Marine infantrymen, Lance Cpl. Byron Law and Lance Cpl. David Javier Salazar-Quintero, who were pulled over and arrested by Border Patrol on July 3 — along with three undocumented immigrants in the backseat — as they were allegedly trying to make a quick buck shuttling people from Mexico into the United States, according to a federal court complaint first reported by Quartz.

According to the July 3 complaint, Law told Border Patrol that he was an active-duty Marine and dimed out Salazar-Quintero as the organizer of the smuggling operation. "Law stated that last night, Salazar called and asked him if he was willing to make $1000.00 USD picking up an illegal alien," the complaint said.

On July 2nd, Law said they both traveled to Jacumba, California while being guided "via cell phone instructions from an Unknown Mexico number," the complaint said. They then picked up a single immigrant and brought him to a McDonald's parking lot in Del Mar, it continued.

The next day, Law said Salazar called him for another job. This time, they both went to the same area and picked up "three illegal aliens" off the I-8 freeway.

Salazar, meanwhile, said Law introduced him to smuggling through a recruiter. Salazar also admitted to coming to Jacumba to pick up undocumented immigrants on four different occasions, the complaint said.

The three immigrants who were arrested identified Law as the driver of the car that picked them up. Two of them said they were going to pay $8,000 to be smuggled into the U.S.

The arrest of other Marines in 1/5 came after NCIS examined the phones of Law and Salazar-Quintero.