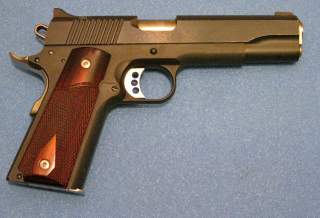 In 2014, the Marine Corps placed an order for twelve thousand Close Quarter Battle Pistols (M45A1). The M45A1 is a 1911A1 built by Colt Defense with modifications, including a Picatinny accessory rail, night sights and a desert-tan paint job. The pistols were distributed both to U.S. Marine Corps Forces Special Operations Command (MARSOC) and special-operations-capable Marine Expeditionary Units.