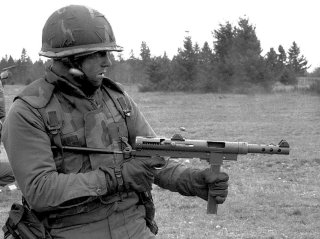 In June 1964, agents of the U.S. Treasury Department staged a seven-day sting targeting what news reports described as a “mysterious warehouse” in Ridgefield, New Jersey.

What they discovered was startling. 517 guns. A few quite interesting. And some … illegal. A photograph in the New York Journal-American newspaper led me to this story.

The warehouse may have belonged to Val Forgett, Jr., an importer of ex-military automatic weapons. Forgett came under Treasury Department scrutiny a number of times and in 1959 was prosecuted for unlawful shipments of unregistered firearms.

Forgett fought this judgement on constitutional grounds. The case dragged on until a final ruling against him in 1965. It’s possible the 1964 raid on the warehouse in Ridgefield — where Forgett was based — was related to the case.

Sadly the resolution of the photograph doesn’t allow us to easily identify some of the guns at the back.

I tried, but was unable, to find contemporary news reports about the raid to learn more about the origins of the guns and what happened to them after they were seized. Today, the collection of weapons would make for a decent museum exhibit.

Thanks to Dan Watters for some excellent additional research and potentially connecting the image to Forgett. This story originally appeared at Historical Firearms.