In 1978, A Horrific Terror Attack Tore The Shah's Iran Apart 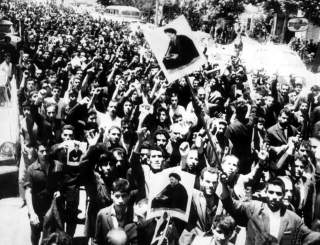 Key point: Perhaps, given time for more liberalizing reforms, Iran would have transitioned to a different form of government than the Islamic revolutionary state which currently hold power.

At 9 PM on August 19, 1978, four men entered the lobby of the Rex Cinema in Abadan after having been disappointed to find the nearby Soheila cinema closed. After snacking on grilled kebabs, they entered the theater to attend the show.

What could have been the beginning of an ordinary night’s entertainment out would instead culminate in what was then the deadliest terrorist attack ever—one that would prove an inflection points in the history of the Middle East.

That evening, 700 movie-goers in the Rex were attending a showing of Gavaznha (“The Deer”)—a 1974 drama directed by Masoud Kimiai. It told the story of a thief on the run from the cops who seeks the aid of a once charismatic high school friend, now a despondent drug addict. The film reflected the economic despair of many Iranians, and its depictions of police violence had barely escaped government censors.

So attending The Deer could be seen as a radical act. And some in attendance may have recalled that August 19 was the anniversary of a coup orchestrated by the U.S. government in 1953 that unseated a president who had the gall to threaten the profits of the Anglo-Iranian Oil Company, placing the Pahlavis back into power.

By the late 1970s, the modernizing, Western-oriented regime of Shah Mohammad Reza Pahlavi found itself under pressure both from socially conservative Shia Muslim clerics loyal to the exiled Ayatollah Ruhollah Khomeini, centrists and Marxists critical of economic inequality and political repression—particularly the brutal use of assassination, torture and rape by SAVAK, the Shah’s feared secret police.

Pahlavi attempted to contain mounting grievances through a limited degree of political liberalization. But the Shah’s reforms ended up letting in just enough oxygen for the situation to catch fire.

In January 1978, protests erupted across Iran in response to perceived slights against Khomeini. Amongst other acts of protests, it became fashionable in Islamist circles to torch cinemas, seen as exporting the Western culture of the Shah’s backers in the United States and UK. Some twenty-nine theaters were set ablaze, occasionally with some loss of life.

After months of mass protests, however, unrest abated by the summer of 1978. International observers concluded the crisis was over. That assessment would be proven earth-shakingly wrong in a few terror-filled hours.

Around 10 PM that evening, the four aforementioned men left the movie early, barred the doors in the lobby and poured a solution of paint thinner and cooking oil on the doorways. While three of the men then reentered the theater, the fourth flicked a match into the carefully constructed death trap.

The result was the deadliest terrorist attack the world had seen until the 9/11 attacks twenty-three years later. While around 320 persons are alleged to have escaped, sources variously claim between 370 to 430 movie goers were incinerated or suffocated by the ensuing conflagration, or trampled to death trying to escape.

The fire department arrived late and struggled to activate fire hydrants to combat the blaze. It took six hours to douse the fire, revealing the skeletal remains of the Rex and its occupants.

Who would perpetrate such a monstrous deed?

The government blamed the actions of Islamist or Marxist radicals.

But to many Iranians on both the left and right, the attack had seemingly been orchestrated by the hated SAVAK to make an example of audiences attending a film with anti-government themes, or to pin a crime on the Islamist opposition terrible enough that it could justify a government crackdown.

When asked for comment, an exiled Khomeini expressed both contempt for cinemas, while asserting a government false-flag operation:

“The Shah’s cinema is a center for prostitution and training of little misguided people; the Moslem people considers such centers contrary to the interests of the country, and considers them apt for destruction even without any orders issued by the clergy. Of course, the [fire] at the Abadan cinema was done at the hands of the Shah’s cronies so that the ‘great fear’ that the Shah had claimed his opposition promises, could become reality.”

Protests reignited across Iran and blazed with new intensity, with hundreds of thousands taking to the streets. From then on, the Revolution gained irreversible momentum, spasms of protests and violence followed by liberalizing concessions alternating on near weekly basis.

Five months after the fire at the Rex, the Shah departed Iran on a “vacation” from which he never returned. A month after that, supporters of a returned Ayatollah Khomeini effectively seized control of the Iranian state.

However, in 1980, a man named Hossein Takbalizadeh came forth proclaiming that he and his friends had torched the cinema as a symbol of decadent Western culture—having been inspired by a local cleric.

Ironically, Takbalizadeh was the sort of petty criminal who was the subject of The Deers—a thief and both a drug dealer and addict. But at some point, a friend helped him find religion and he became immersed in the world of revolutionary Shia Islam. He had been involved in distributing pamphlets and participated in another act of arson.

Abadan, located on the southwestern corner of Iran, was heavily connected to the oil industry, and had not experienced quite the same degree of revolutionary ferment as other Iranian cities. Takbalizadeh and his friends, it seemed, were galled by insinuations by a local cleric that the city’s men wore bras due to their soft and decadent ways, and set out to demonstrate their suicidal fervor.

This was not a welcome narrative for the Islamic revolutionary government ascended to power in Tehran. At first, Takbalizadeh was told to keep quiet after he made confessions to family members and relatives. But eventually he created too much of a stir and was put on trial. There, the prosecution insisted that Takbalizadeh was in fact secretly manipulated by the Shah’s agents.

The petty criminal turned zealot was convicted and executed for starting the fire as a SAVAK agent, even though he maintained throughout that he had instead been acting out of Islamist piety.

While the motivations behind the Cinema Rex incident may remain controversial, its historical impact is indisputable: from the Rex fire sprang the final round of protests that unseat the Shah and installed an Islamic Revolutionary government.

From that revolution arose the Iranian hostage crisis—which likely sealed the electoral defeat of the Carter administration by Ronald Reagan; the Iran-Iraq war in which Abadan was besieged by Saddam Hussein’s Iraq; the 1991 Gulf War triggered when Iraq invaded Kuwait, its creditor in the Iran-Iraq conflict; and ultimately the 2003 U.S. invasion of Iraq, the repercussions of which continued to haunt the world to this day.

Could history have taken a different turn without the Cinema Rex fire serving as a galvanizing incident for the Iranian Revolution? Surely, Shah Pahlavi’s hold on power was precarious enough that likely some other incident would have sealed the fate of his repressive regime. Perhaps Saddam Hussein’s Iraq was bound to enmesh itself in ill-advised wars of conquest.

But perhaps, given time for more liberalizing reforms, Iran would have transitioned to a different form of government than the Islamic revolutionary state which currently hold power. Perhaps Iraq would have maintained the peace process begun with Iran in 1975.

The wheels by which the course of human events are turned can be as mysterious as they are cruel. We can never know what might have been—only that a monstrous act of terrorism committed against Iranians on August 19 left a tremendous legacy of suffering in its wake that would profoundly reshape the history not only of Iran, but that of the Middle East and the United States.

Sébastien Roblin holds a Master’s Degree in Conflict Resolution from Georgetown University and served as a university instructor for the Peace Corps in China. He has also worked in education, editing, and refugee resettlement in France and the United States. He currently writes on security and military history for War Is Boring. This article appeared last year.