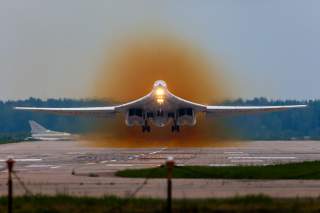 As the Russians send bombers to Venezuela, the Pentagon is stopping just short of firing a pistol into the air and yelling “Liberación!”

- The two TU-160 strategic bombers arrived in strife-ridden Venezuela for joint exercises on Monday along with an AN-124 transport aircraft and IL-62 jetliner, the Russian defense ministry has announced.

- It is the first time Russian bombers have deployed to Venezuela since 2013, according to the Defense Department.

- Venezuela’s economy and healthcare system are in a state of collapse, prompting the United States to send the hospital ship USNS Comfort to South America, in part to treat Venezuelan refugees.

- The Defense Department is responding to the Russian deployment by upping its rhetorical game to rival the passion shown by Marlon Brando in Viva Zapata!

-The Venezuelan people deserve better than the autocratic rule of President Nicolás Maduro, Pahon said. That is why the United States is seeking a way for Venezuela to return to democracy, the rule of law, and respect for human rights.

- “Maduro should know by now the Cuban model doesn’t work for anyone, not even Cuba,” Pahon said.