$2 Trillion for America: Did the Senate Just Save the U.S. Economy from Coronavirus? 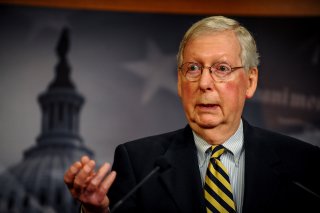 At 1am last night, Mitch McConnell and Chuck Schumer came together on the Senate floor to announce that Republicans and Democrats had reached a deal on the new relief and stimulus package. Totaling two trillion dollars, by far the most expensive bill of its kind in modern American history, its intention is to provide relief to those affected by the coronavirus epidemic and stimulate the economy ahead of an approaching depression.

The senators, who reconvene at noon, have pledged to pass the bill by end of today. House leadership is discussing among themselves how to expedite the process of passage, including possibly using a voice vote. The goal is to have the bill on President Donald Trump’s desk to be signed by the end of the week.

The passage was originally expected days ago, but negotiations had fallen through on Sunday after Democrats had demanded a series of poison pill amendments be added. The original bill had been primarily crafted by Senate Republicans, with Democratic leadership kept informed. This stalling provoked frustration by Republicans, both conservative and moderate, while Democrats insisted that they were repairing major flaws in the legislation.

“After sleep-deprived nights and marathon negotiating sessions, we have a bipartisan agreement on the largest rescue package in American history,” said Senate Minority Leader Chuck Schumer of New York. “This bill is far from perfect, but we believe the language has been improved significantly to warrant its quick passage.”

Agreeing with his colleague, Senate Majority Leader Mitch McConnell of Kentucky called the measure “a wartime level of investment into our nation.”

This is what’s being called the “third act” of congressional action, after congress earlier this month approved an $8.3 billion bill for public-health related government agencies and a $100 billion bill that included paid family leave, free coronavirus testing, and expanded food programs.

When McConnell and Schumer made their joint announcement, the terms of the bill had been finalized but the physical bill itself not yet written. Most of the provisions and details have not been released publicly. But broadly, the legislation allocates $250 billion for direct cash payments to individuals in the hopes of covering temporary expenses during this crisis, $250 billion in added unemployment insurance benefits for those laid off because of the pandemic, $350 billion in loans to small businesses, and $500 in loans for big businesses.

Signs from the financial markets were a mixed reaction. Following a significant one day gain the day prior to the bill’s final announcement last night out of anticipation, the Dow Jones Industrial Average slipped 200 points before markets opened this morning. The daybreak helped rally a handful of spooked investors, with minimal gains on the Dow of just less than a thousand. The S&P increased 1.7%, and the Nasdaq 1%.