In 2014, A Chinese Official Declared a J-31 Stealth Fighter Could “Definitely Take Down” the F-35 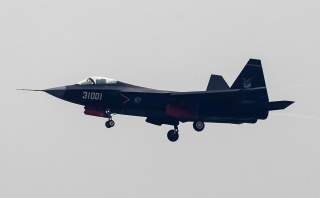 As to the J-31’s ability to take down American and allied F-35s, most experts agree it’s too early to tell.

Appearing on China’s state broadcaster on Tuesday, Lin Zuoming, president of Aviation Industry Corp of China (Avic), the state-owned Chinese defense company that manufactures the J-31, boldly declared that “When it [the J-31] takes to the sky, it could definitely take down the F-35. It's a certainty.”

Lin went on to say that the J-31 would compete with the F-35 in the global marketplace, painting China’s second stealth fighter as a low-cost alternative to the U.S. made fifth generation jet.