In 2015, B-52 Bombers Flew Thousands of Miles to Carpet Bomb Mock Targets 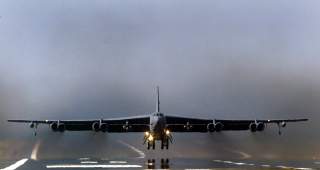 On May 18, two American B-52H bombers flew non-stop from Louisiana to a range in Jordan, dropped a massive payload of bombs, then turned around and flew back home.

The non-stop round trip — 30 hours and 14,000 miles in total — culminated in the twin bombers blasting a target range in full view of observers and public affairs cameras.

It was a rare display of the bomber’s full combat power. B-52s often fly training missions around the globe, but rarely drop dozens of live bombs. What’s all the more interesting is that it happened a hop and a skip away from Syria and Iraq.

Since August 2014, the United States has led an international air campaign over the two countries. But the U.S. Air Force hasn’t sent any B-52s — for good reasons. Instead, fighter aircraft and B-1 bombers armed with missiles and guided bombs have done most of the work.

“At this time, there are no plans to deploy the B-52 in support of Operation Inherent Resolve,” a public affairs officer at the Pentagon’s top headquarters for the Middle East told War Is Boring in an Email. “B-1B ‘Lancers’ … are currently meeting our requirements for long-range bombers.”

Inherent Resolve is the Pentagon’s nickname for its air strikes on Islamic State. The flying branch regularly sends detachments of B-1s—more commonly known as “Bones”—to places such as Al Udeid Air Base in Qatar.

B-52s were key in the opening stages of the war in Afghanistan and the 2003 invasion of Iraq, but the Air Force shifted to B-1s quickly thereafter. The swing-wing jets can drop just as many bombs as their larger cousins, but lack the psychological weight of the flying fortresses.

The Boeing-made, eight-engined B-52 is an iconic example of American military power — and the lumbering bombers typically prompt more of a reaction from the public and the press than the sleeker Bones.

The Air Force routinely sends B-52s to make symbolic statements to potential enemies during training exercises and other events. In Jordan, the bombing run was part of the annual and multi-national Eager Lion 2015 exercise.

For the most part, the nations at the event were members of the international coalition working to defeat Islamic State. Besides the Americans and Jordanians, the exercise included Iraqi, French, British and Canadian troops — among others.

With heavy fighting right next door, this mission marked the first time a heavy bomber of any type had participated in the annual drills.

But the nature of Baghdad’s current battle with Sunni extremists means the Air Force probably won’t deploy the B-52 into combat anytime soon … if ever. Even as American planes shift to bomb Islamic State in Ramadi, official reports suggest a lack of targets.

Since Islamic State seized of the capital of Anbar province, Air Force and Navy pilots have hit a host of undefined “tactical units,” “fighting positions,” “buildings,” “ammunition structures” and more in the city, according to official reports. American ordnance also destroyed one piece of construction equipment and a lone motorcycle.

In the past, American fliers have blown up equally vague “fighting positions,” “checkpoints,” “roadblocks” and even “berms” manned by the Sunni militants, according to the Pentagon’s regular post-strike releases.

From unclassified video footage, many of these fortifications hardly warrant the involvement of a B-1, let alone B-52s. There might not be any targets, large or small, most of the time. As of January, Air Force jets weren’t even dropping bombs or firing missiles on 75 percent of their outings.

The Pentagon’s campaign probably wouldn’t be well served by the heavy bombing runs the B-52s performed during Eager Lion. To avoid alienating other Sunnis — and to make sure the terror group doesn’t score an easy propaganda victory — the Pentagon insists it’s working hard to avoid civilian casualties.

Yet three days after the B-52s returned home to Louisiana from the skies above Jordan, U.S. Central Command admitted that an airstrike likely killed innocent civilians in Syria six months earlier.

“The preponderance of the evidence in the investigation indicates the airstrikes … likely led to the deaths of two non-combatant children,” an official statement disclosed. “The strikes also resulted in minor injuries to two adult non-combatants residing near one of the targets.”

The Pentagon also has an “Iraqi instability plan restricted target list,” according a heavily redacted report released at the same time. The list includes “dual use facilities … characterized as serving both a military and civilian [i.e., noncombatant] purpose or function.”

With these restrictions and renewed public concerns about civilian deaths, the Pentagon has few, if any reasons to add B-52s to the mix. Given Washington’s desire to limit its involvement in the conflict as much as possible, that reality is unlikely to change any time soon.

“I think the B-1s … seem sufficient for now,” Michael Knights, a military specialist at The Washington Institute for Near East Policy, told War Is Boring. “They can get to targets quick and have greater loiter and payload.”

“Our problem is not a lack of strike aircraft really,” Knights added. “It is a lack of eyes on the ground to allow these aircraft to deploy weapons.”

Without troops actually on the front lines, American officers in Iraq have a limited understanding of what is actually going on. Air Force officials told War Is Boring that warplanes often carried out strikes without any coordinationwith Iraqi forces on the ground.

“The events of recent weeks there have highlighted the central importance of having a capable ground partner,” Defense Secretary Ashton Carter said on May 27. Three days earlier, Carter had questioned whether Baghdad’s troops still had the will to fight.

So, for now at least, the B-52s’ time is better spent making statements around the world. But they’ll still be ready to go if the situation in Iraq gets any worse.