In 2016, a Fleet of Warships and Submarines Tried to Sink This U.S. Navy Frigate 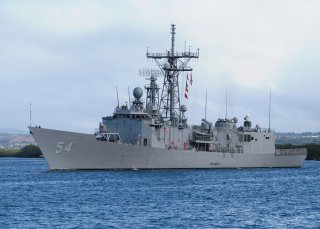 The Perry-class was designed for convoy escort—but managed to do more than that. Here’s why they were so hard to sink.

The Oliver Hazard Perry-class are frigates, and were originally envisioned as escort platforms for anti-aircraft and anti-submarine warfare while crossing the Atlantic Ocean.

In the event of a war with the Soviet Union, the Perry-class would defend open-ocean convoys, like merchant ships or amphibious warfare ships. Today, they are able to conduct surveillance, interception operations, and other escort duties and are noted for their durability.

The Oliver Hazard Perry-class also has the distinction of being the first computer-designed ship, which was designed and planned by the first female program manager in the U.S. Navy, Raye Montague. The Navy had budgeted a month for the ship design, but Montague was able to complete the design in a mere nineteen hours with computer aids.

The Oliver Hazard Perry-class are known for their robustness and durability. In 2016, a retired Perry-class was towed out to sea, where the U.S. Navy used it as target practice, proving the class’ durability.

It was hit by “a Harpoon missile launched by a South Korean submarine, the ROKS Lee Eokgi. Next, the Australian frigate HMAS Ballarat launched another Harpoon, and an Australian SH-60S helicopter shot it with a Hellfire missile. U.S. maritime patrol aircraft then hit it with Harpoon and Maverick missiles.”

But that was only the beginning for the frigate, as more ordinance was inbound.

“The cruiser USS Princeton hit it with yet another Harpoon missile, and an American SH-60S Navy chopper hit it with more Hellfires. U.S. Navy F/A-18 Hornets lobbed a 2,000 pound Mk. 84 bomb at it, and a U.S. Air Force B-52 bomber dropped a GBU-12 Paveway laser guided 500 pound bomb on it. A U.S. Navy submarine got into the action, striking it with a Mk. 48 torpedo.” All of this to sink a single Oliver Hazard Perry-class frigate.

Yet the Perry-class was heavily criticized from their beginning and were not America’s favored warships. More expensive, more highly-capable destroyers, like those equipped with the latest AEGIS system, drew precious funding dollars.

Also over a decade ago the standard SM-1R missiles the Perry-class had for air defense were badly needed an upgrade. But rather than modernizing them, a simple chain gun was swapped into their place. Not exactly an improvement.

Getting the Navy up to 355 ships had been a Navy priority, and reactivating some of the Perry-class would have cost only $35,000 per hull.

“With obsolete combat systems and aging hulls, these vessels would require significant upgrades to remain warfighting relevant for another decade,” according to a U.S. Navy document, which explained that money for the Perry’s would be better used elsewhere.

“Any potential return on investment would be offset by high reactivation and life-cycle costs, a small ship inventory, limited service life, and substantial capability gaps. Furthermore…these costs would likely come at the expense of other readiness, modernization or shipbuilding programs.” The frigates were never reactivated.

Still, one of their successor classes, the Independence-class is far from perfect, and has many problems.

Not bad for a cheap, computer-generated design that was stripped of its defenses and ridiculed within the Navy. Not bad at all.