Is 2020 Azerbaijan and Armenia’s Favored Year for War? 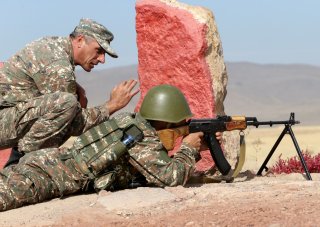 The clashes have not yet turned into an all-out war, but both sides employ a wide variety of military equipment, such as long-range artillery, drones, and tanks, and accuse one another of firing the first shot. Regardless of legal and ethical concerns, both sides have strategic incentives to initiate, escalate, and keep fighting a conflict. The bargaining theory of war and the idea of bounded rationality help us better understand why states initiate and fight wars by focusing on states’ prospects for military victory. Bargaining over a territory can be challenging if negotiating parties have incomplete information about each other’s actual military capabilities. In such a situation, perceptions and signaling relevant information matter.

At this point, whether states are optimistic or pessimistic about the outcome of engaging in a conflict is key to understanding it's timing. This logic could apply to the current conflict in Karabakh. For Azerbaijan, there appears to be optimism about victory now. On the Armenian side, it seems there is more pessimism about defeat in a future war. These differing perceptions jointly increase the risk of war by intensifying a syndrome that might be called better-now-than-later.

Armenia estimates that the status quo in Karabakh will change in the near future at the expense of its interests as the balance of military power shifts in favor of Azerbaijan. In other words, events on the ground are moving in favor of Azerbaijan and against Armenia. For this reason, it may be preferable for Armenia to fight a war when it has the least chance of being stuck in a military stalemate with Azerbaijan, rather than fighting at an uncertain future point when Azerbaijan is more likely to win. Therefore, Armenia may want to push Azerbaijan into a confrontation in which no one could claim a decisive military victory, hoping for third-party intervention. In other words, Armenia plays a game in which it will neither win nor lose.

On the other hand, Azerbaijan does not want to fight a war whose time has not yet arrived. Put differently, if Azerbaijan military planners believe that Armenian military capabilities are far from competing with their own, Baku could optimistically calculate that it is high time to initiate a war over Nagorno-Karabakh. Thus, Azerbaijan will have strong incentives to escalate the conflict into a full-blown war.

Military history is replete with numerous examples where warring parties’ prospect of victory affected the timing of conflict. For instance, before the Russo-Japanese War in 1905, the Japanese war planners thought that they had a fifty-fifty chance of victory when they attacked, believing their chances of winning will be decreasing as time passes. Before the Yom Kippur War in 1973, Egypt’s strategic assessment was based on a military stalemate in which it would have a bargaining chance to reclaim the Sinai Peninsula and push the Israeli to withdraw, instead of a decisive military victory. Also, if the Franco-Prussian war in 1870-71 had broken out a year later, the French would not have been defeated so quickly. The French Army’s modernization had not yet been completed at that time. We could have been reading the First World War in history books as the Russo-German War of 1914 or the Russo-Austrian-Hungarian War of 1914. But it turned into a general war between the major powers because of mutual pessimism about defeat in a postponed war. Immediately after the assassination of the Austro-Hungarian crown prince, Germany, fearing growing Russian military power, thought it was the best moment to fight. France wanted to fight because Germany would fight against Russia at the same time. Russia relied on France’s commitment to fighting against Germany.

Regarding the conflict on Nagorno-Karabakh, the Armenian strategic assessment is not based on an optimistic assessment about victory, but pessimism about losing a potential war in the future. Although the clashes take place between Azerbaijan and Armenia, regional powers like Turkey and Russia have strong incentives to involve themselves in the conflict, increasing the risk of a regional war across the South Caucasus. Turkey has already declared unequivocal support for Azerbaijan. While so far Russia has not sent open and strong political support to Armenia, it has allegedly involved in the conflict through electronic warfare systems. But further escalation could trigger direct Russian involvement in the conflict, turning the region to another confrontation zone between Turkey and Russia.

Bekir İlhan is a Ph.D. student in Political Science at the University of Cincinnati in Ohio, USA. His research interests are international relations theory, security, war, military doctrine, and deterrence. Twitter: @bekirilhan93