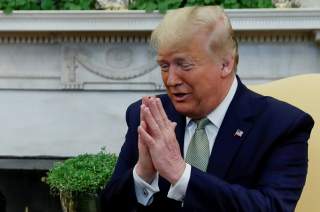 Although presidential approval ratings are always worth watching, March is traditionally the month where political scientists and pundits start paying closer attention to them. Presidents who have low approval ratings in March tend to lose their reelections, while those with strong ones tend to win easily.

So where is Donald Trump? In the latest Gallup poll, taken February 17-28, 47 percent of adults approved of the job the president was doing. The Fox News poll of registered voters taken February 23-26 gave him an identical 47 percent approval rating. The early March online Economist/YouGov survey pegged the president’s approval at 44 percent.

Barack Obama’s ratings in the spring of 2012 were similar to Trump’s. In Gallup’s late February-early March 2012 poll, 45 percent approved and 48 percent disapproved. He did not hit 50 percent until early September of that year. From early October until Election Day, his rating hovered right around 50 percent. Whether Trump’s approval will rise, as Obama’s did in 2012 over the course of the election year, remains to be seen.

Gallup recently reported that Trump’s third year, 12th quarter approval averages were his best to date, but that they were still among the worst for post-World War II presidents. The partisan gap between Democrats’ and Republicans’ approval in Trump’s ratings was a chasm: 82 points, the largest gap in Gallup’s history. It is close to the gap in Obama’s last year in office, 77 points. It was 76 points in 2012.

This article by Karlyn Bowman first appeared at AEIdeas.