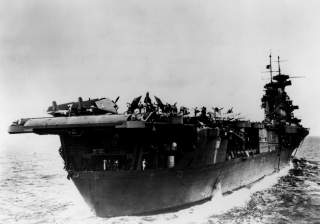 Like 1940, second, 2020 is a time of technological flux. The aircraft carrier existed back then, but it remained to be seen whether it would supplant the big-gun battleship as the fleet’s heavyweight. Flattops were working vessels by 1940; only their “main battery,” their chief weapon, meaning the air wing, remained a question mark. As carrier-based aircraft improved, so did the carrier’s hitting power and range. Congress hedged under the Two-Ocean Navy Act, funding new battleship construction on a modest scale while also authorizing a new class of fleet carriers, the Essex class—which ended up being some of the most successful ships of war ever put to sea. Aircraft manufacturers, meanwhile, turned out new types of airframes at an astonishing clip. Long-range, precision, high-seas firepower was the result. Battleships couldn’t keep up.

If carriers were the ships of the future in 1940, then unmanned surface and subsurface vehicles may be today’s ships of the future. Emphasis on maybe. Not long ago, in fact, the Office of Management and Budget suggested that the navy leadership include unmanned vessels in the official ship count, helping boost the total toward 355. Navy leaders demurred, and rightly so. Carriers had been around for two decades by 1940, and the basic technology—steam engineering plants, rudimentary radar, and on and on—was mostly familiar. At the very least the aircraft carrier was a safe bet as a fleet auxiliary, a newfangled technology that augments what the fleet already does well—in this case gunnery duels between surface fleets. Carrier warplanes could scout for enemy forces, harry them from the air, and prepare the ground for a decisive surface battle. They had proved their worth already.

But unmanned warships remain in their infancy in 2020 relative to carriers in 1940. They either won’t carry crews at all or will carry them only at commanders’ discretion. That spares shipbuilders a host of requirements for habitability and should keep the cost of each hull down—allowing unmanned subs and surface ships to be built in bulk. Fleet designers can scatter capability—sensors, weapons magazines, and the like—among hosts of small craft. That’s good; it allows for mass, for dispersal of capability in the face of enemy missile barrages, and thus for resiliency in the force. Unmanned assets, then, are sure to provide value to fleet commanders. But how much? Much fleet experimentation remains to be done to answer that question. Just because a technology is new and fresh doesn’t make it a game-changer like the Essex class in 1940. Navy chieftains are right to postpone redefining unmanned vehicles as ships for the time being.

We simply will not know whether drone craft are fleet auxiliaries or qualify as something more until we try them out in the field, putting them to the test of reality. As the Nobel-winning physicist Richard Feynman quipped: “It doesn’t matter how beautiful your theory is, it doesn’t matter how smart you are. If it disagrees with experiment, it’s wrong.” Reality has been unkind to a number of beautiful theories about ship design concocted by smart people this century. Tut, tut, Feynman would say. Better to vet ideas in controlled field trials than let combat—an unforgiving arbiter of what does and doesn’t work at sea—render its verdict when victory and defeat are at stake.

In that sense, then, 1940 represents a cautionary tale for shipwrights in 2020. Congress, the administration, and the U.S. Navy placed a solid bet on flattops on the eve of World War II. Wagering on unmanned craft today entails far more risk. Where does that leave us? The navy is staring at a modest uptick in numbers of hulls, to the tune of 25-30 percent, rather than the avalanche of shipbuilding set loose in 1940. Operators and strategists, then, must figure out how to wring maximum battle power from a modest number of ships, aircraft, and munitions. Meanwhile, if navy leaders covet more resources, they need to make themselves convincing storytellers. They need to explain to Congress and the American people why China and Russia are challengers on par—if not more—with the Axis powers of yore, and why counterbalancing them warrants national effort on par with the Two-Ocean Navy Act.

Tell the sea service’s story well and congressional partners may take up the cause. Carl Vinson, call your office.