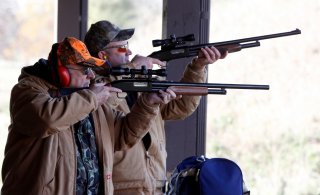 There’s been an ammunition shortage affecting Americans for over a year now, with hunters, gun users, and even some police departments either having trouble finding ammo, being limited in how much they can buy, and having to spend more than they typically do.

The shortage has been attributed to many factors, including pandemic-era supply chain disruptions, the bankruptcy of major supplier Remington in 2020, the massive amount of new gun owners in the last year, and the resulting surge in demand. The problems have become even more prominent as hunting seasons have approached in much of the country.

This week, WBAY reported on how the ammo shortage is being dealt with in Wisconsin, where deer season begins November 13.

“There’s nothing that we can do. We try to get as much in as we can obviously to sell it, but it’s the distributors that have a short supply and manufacturers do too,” Scott Virlee, owner of Virlee GunWorks, told the station.

Another local gun store, Jon’s Sport Shop, has been getting customers from around the country who are looking for certain ammunition.

The shortage continues to be a problem next door in Minnesota, WCCO reported this month. The deer season there opens a week earlier, the first weekend in November.

“That’s got a lot of people coming in, last-minute preparation, sighting in guns, trying to find ammo,” Osseo Gun Club and Pro Shop’s gun manager Joe Martinson told the Twin Cities TV station. “When you do find (hunting ammo), you buy it, and it’s gone quick.” He added that while most years he buys several cases of shotgun slugs, each containing 50 boxes. But now, he has trouble finding even one.

“Forty percent of firearms sales [last year] were people who had never owned a firearm in their life before,” he told WCCO. “As much as they’ve tried to keep up, they’re still behind and it just got them caught short this hunting season."

A gun store customer, Chris Helfrict, provided the station some tips for navigating the shortage, which included trying a different gun, asking around in hunting groups for extra ammo, and buying in bulk when possible.

“You need to make every shot count, let’s put it that way,” he told WCCO.