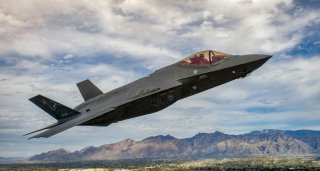 It’s been a bang-up year for the F-35 joint strike fighter program. Promotional material from Lockheed Martin, one of the top companies behind the stealth jet, explains that they have delivered about 750 jets to date.

Here, There, and Everywhere

The United States is naturally the number one operator of F-35s worldwide, but other countries are increasingly opting for the stealth fighter and buying into the program. In addition to Finland, Switzerland also purchased F-35s in 2021.

Canada is also mulling an F-35 acquisition decision to replace their aging F/A-18 derivatives, the CF-18 Hornets. The odds for the F-35 in Canada look good, given the country’s proximity to the United States, their close historical ties, and the stealth capabilities the F-35 can offer. Lastly, an as-of-yet unnamed foreign customer ordered an F-35 variant in late December.

Out With the Old, in With the New

In a sign of just how far along the world’s most prolific fifth-generation fighter program is, the Department of the Navy recently put out a solicitation to put three of their oldest F-35s into long-term storage.

"With the conclusion of the Systems Development and Design (SDD) portion of the F-35 flight test program, three of NAS Patuxent River F-35 Integrated Test Force (ITF) flight science aircraft (x1 F-35C and x2 F-35B) are no longer required to gather flight test data,” the Navy notice details. “Therefore, it has been determined at the F-35 Joint Program Office (JPO) that these aircraft will be preserved via a preservation/protection system (i.e. shrink wrap) and transported elsewhere for other uses at a later date.”

The request specifies that the early stealth jets should have a stable shelf life of five years, aided by anti-corrosion measures that will eliminate or minimize wear and tear caused by weather, moisture, or other kinds of damage. A sort of protective plastic wrap would essentially cover the jets. Though essential for any airframes, it is vital for the F-35’s radar-absorbent skin, which is more sensitive to environmental conditions than other airframes.

The F-35 stealth program has weathered criticism from many corners. Critics sometimes point to program costs—over budget and the most extensive defense program in American history—as a possible shortcoming. And while budgetary issues are a valid point of concern, there is just no other production fighter that offers the mix of capabilities that the F-35 does. In fact, wargame after wargame proves the F-35s dominance in the skies and as “aerial quarterback.”

It is, therefore, little wonder that so many countries are lining up behind the warplane.