$23 Billion Later, the U.S Navy Is Figuring Out What to Do with Its Stealth Destroyers 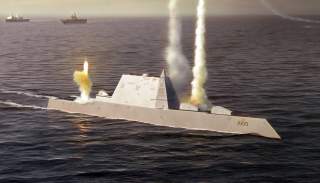 Named for a SEAL who posthumously received the Medal of Honor for his actions in Iraq in 2006, Monsoor is the second in the three-ship Zumwalt class.

Now with two Zumwalts, the Navy is still struggling to figure out what to do with the vessels. The Navy plans to base all three of the destroyers in San Diego.

They could become specialized surface-warfare ships, sailing alone or in small groups of other vessels to hunt down enemy ships.

They also could join an experimental squadron the Navy is considering standing up in order to develop tactics for new ships and robots.

And there's still a chance the Zumwalts could perform the mission for which they were designed, sneaking close to shore in order to bombard enemy forces in preparation for an amphibious assault by U.S. Marines.

Regardless of where the Zumwalts end up, their 20-year journey into front-line service has been ... complicated.

Work began on the Zumwalt class in the 1990s. The goal was to develop a large, heavily-armed and highly survivable ship. Over that decade the concept changed. With the Navy focusing more on near-shore warfare, the Zumwalt evolved into a stealthy fire-support vessel sporting powerful 155-millimeter cannons.

The Zumwalts feature low-signature tumblehome hulls. Their missile-launch cells are along their outer hulls and double as armor. Their 155-millimeter guns are more powerful than the 127-millimeter models on other surface ships and can fire farther.

But the ships have problems beside their high cost. Their guns are incompatible with the Navy's standard ammunition. Efforts to develop custom, precision-guided shells have failed on account of the low volume and resulting high cost. As of early 2019, the two Zumwalts both lack ammunition for their two guns.

With just three Zumwalts, the Navy probably reliably can deploy just one at a time. Between deployments, the other two ships could participate in an experimental squadron the sailing branch wants to establish.

Citing tactical experiments taking place within the Navy's mine-warfare community, Brown proposed to establish a "surface development squadron." The idea dates back to early 2018, when other officials called for a "experimental squadron" to work out joint tactics for the Zumwalts, unmanned ships, Littoral Combat Ships and Burke-class destroyers.

Along the way, the Zumwalts might finally get shells for their high-tech cannons. In a test in the summer of 2018, a Burke-class destroyer fired 20 hypervelocity projectiles from its 127-millimeter gun. The shell, designed by BAE Systems, is a sabot round, meaning it includes a penetrator and a surrounding casing that separates from the penetrator after firing.

Enlarge the casing and you can fit the same penetrator to larger-caliber guns such as the Zumwalts' 155-millimeter weapon. "That is one thing that has been considered with respect to capability for this ship class," Naval Sea Systems Command's Capt. Kevin Smith said. "We’re looking at a longer-range bullet that’s affordable, and so that’s one thing that’s being considered."