3 Challenges in Europe America Must Pay Attention to Now 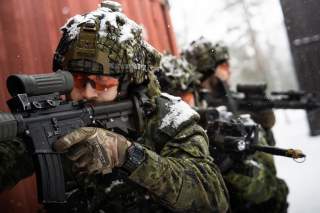 When it comes to European geopolitics, most U.S. policymakers focus on the big issues: Brexit, the future of NATO, a looming trade war between the United States and the European Union, Russia’s war with Ukraine.

Decisionmakers must pay attention to these important matters. But they cannot afford to let fly under the radar other issues that have the potential to create serious problems for the United States and its allies.

Here are some of the challenges in Europe that are not getting the attention they deserve in Washington.

Russian adventurism in Ukraine and Syria grabs a lot of attention. Less noticed is Moscow’s militarization of the Arctic.

Russia has formed two Arctic brigades. It devotes two-thirds of its navy to the Arctic-based Northern Fleet. An Arctic command, established in 2015, now coordinates all Russian military activities in the region. And Russia plans to form Arctic Coastal Defense divisions, to be stationed on the Kola Peninsula and the eastern Arctic, under the command of the Northern Fleet.

A decade of investment has given Russia fourteen operational airfields and sixteen deepwater ports. And Moscow continues to develop equipment optimized for Arctic operations, such as three new nuclear icebreakers that will join its fleet of forty icebreakers (six of them nuclear) already in service.

Russia is an Arctic power. A strong military presence in the region is to be expected. However, its continuing build-up there should be viewed with some caution, due to Moscow’s pattern of aggression. Also worrisome is the fact that NATO is divided on how best to best respond to Russia in the region. The allies cannot even agree to a common Arctic strategy.

The Heart of Europe

The Czech Republic causes few problems inside NATO or in the EU. Yet it warrants watching. On the surface, everything seems fine. Below the surface, a political crisis is roiling.

President Miloš Zeman, well known for his coziness to Russia, is now warming toward China. He has even criticized the presence of U.S. troops conducting military exercises in his country. Meanwhile, scandal and controversy threaten to undermine, and possibly bring down, the government of Prime Minister Andrej Babiš. He is currently the subject of a corruption probe by Czech authorities, and the EU is investigating alleged conflicts between his political and business interests. Last year Babiš’ son was secretly filmed saying that his father sent him out of the country, to Russian-occupied Crimea of all places, so he could not be called as a witness in this case.

Speaking of Russia, like Zeman, Babiš has been accused of being uncomfortably close to Moscow. Slovakian records show that he collaborated with the Czechoslovakian state secret police during the Cold War. He has been critical of European sanctions against Moscow and now relies on the support of the Communist Party to prop up his government. Late last year, tens of thousands of protesters––the largest such demonstration for decades––took to the streets to protest his scandal-prone administration, calling for him to resign.

Though small, the Czech Republic plays an important geopolitical role in regional groupings such as the Visegrad Group. NATO already has enough internal problems with countries like Hungary. A politically unstable or Russia-sympathizing Czech Republic would make matters worse.

The eastern Mediterranean Sea is of great geo-strategic importance. It is also rife with competition and tension that could potentially turn into conflict. On top of that is the struggling U.S.-Turkish relationship.

It does not take much thought to see why the region is ripe for geopolitical confrontation. Israel, Egypt, Lebanon, Greece, Turkey, Syria, Northern Cyprus and Cyprus all share maritime borders in the eastern Mediterranean. In some cases, those borders are disputed. Competing claims over oil and gas deposits under the sea exacerbate an already tense situation in the region—especially around the island of Cyprus.

Of course, there is the situation on Cyprus itself. The island has been divided since Turkey’s 1974 invasion and the unilateral declaration of independence eight years later by the so-called Turkish Republic of Northern Cyprus. All it would take is one accident or misunderstanding to set off a chain of events which could lead to regional conflict.

Militarization in the Arctic, political instability in an important NATO member, and a smorgasbord of geopolitical tensions in the Eastern Mediterranean—all share one common theme: Russia.

These issues might seem small today. After all, bullets are not flying in the Arctic; the Czech Republic remains a member of NATO, and—so far—the Eastern Mediterranean has been relatively peaceful. Yet each has the potential to become a major challenge for the U.S.

Moreover, the Kremlin knows that the United States is focused on other issues in Europe and around the world. It will seek to take advantage of this distraction at every opportunity.

The United States and its allies need to look beyond the more visible European challenges like Russia’s war in Ukraine or the political paralysis caused by Brexit and take a broader, deeper and more sophisticated approach to Europe.

With America’s treaty obligations in NATO, the United States ignores these smaller problems at its peril. History shows that small problems in Europe can quickly become big problems for America.