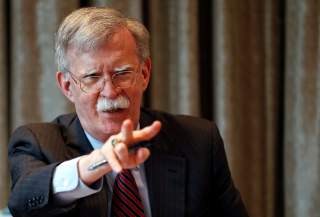 Assistant to the President for National Security Affairs, commonly referred to as the national security adviser, is one of the most coveted jobs in the U.S. federal government. The right individual can make the office a paragon of power and stability. It takes a special person to run the inter-agency process, somebody with impeccable organizational skills, the unwavering trust of the president, a sharp mind, and an aversion to nonsense. Brett Scowcroft, who held the post twice, had all of these characteristics in spades.

But just as the right man or woman for the job can make the president’s work more manageable, the wrong person can result in disaster. And in the worst-case scenario, it can even lead to legal trouble.

The retired Lieutenant General and former Defense Intelligence Agency director was the kind of tough-talking, blunt, and brash personality that appealed to President Donald Trump. He was also a loyal Trump soldier on the campaign trail, offering his services as a surrogate when most of the other ex-military brass were running for the hills and endorsing Hillary Clinton.

Flynn, however, was a terrible manager who was in over his head the moment he stepped into the White House. His twenty-two days on the job were defined by free-wheeling chaos, where decisions were made without any process whatsoever—if they were made at all. Flynn’s discussions with the Russian ambassador to the United States during the presidential transition period were plain stupid and the mark of an amateur who didn’t understand the most basic rules of what is and isn’t proper. Above all, Flynn’s decision to protect himself by lying to FBI investigators about those conversations—and lying to Vice President Mike Pence about them as well—was a public embarrassment for the administration less than a month into its tenure and a ticket to a quick resignation. Flynn is now in years into a legal process, awaiting sentencing.

John Poindexter was the quintessential clean-cut Navy officer. Ascending the ranks to become a three-star vice admiral, his three-decade naval career was filled with commendations. Poindexter graduated from the Naval Academy in 1958 first in his class; served under the brainy Robert McNamara at the Pentagon and as a top aid to three secretaries of the Navy, and was a military assistant on President Ronald Reagan’s National Security Council.

All of his credentials, however, weren’t enough to prepare him for a slap-dash NSC that often pursued its own initiatives to the exclusion of other departments in the national security bureaucracy. His loyalty to Reagan may have saved the president from being legally emerged in the Iran-contra affair, but it also led to his downfall and the most serious presidential scandal since Watergate. After blessing Oliver North’s diversion scheme, where profits from arms sales to Iran were funneled to the contras in Nicaragua (in contravention of law), Poindexter worked to distance Reagan from the scheme by not telling him about it and destroying documents associated with the operation. When he was called to testify in an open session months later, the former national security adviser hid critical details and flubbed his answers, helping to lead to a conviction (which was overturned) on five counts of conspiracy, destroying evidence, and making false statements.

For a position that requires seeing the big picture, Bolton was a black-and-white, us-vs.-them character. He wasn’t much for nuance; if a country didn’t get out of the way or toe the U.S. line, it needed to be marginalized or pummeled into submission. He may very well have been the most militaristic national security adviser in American history—so militaristic, in fact, that weeks before accepting the job, he publicly argued for the United States to bomb North Korea, a country that could have as many as sixty nuclear warheads. Just as troubling as Bolton’s worldview, however, was his sharp bureaucratic elbows, which included replacing the traditional NSC meeting with one-on-one sessions with the president, likely to block alternative options that didn’t suit Bolton’s own agenda. The rumored leaking, horrible interpersonal relationships with other officials, and constant undermining of Trump’s diplomatic initiatives didn’t help either.

Dan DePetris is a Fellow at Defense Priorities as well as a columnist for the Washington Examiner and the American Conservative. You can follow him on Twitter at @DanDeptris