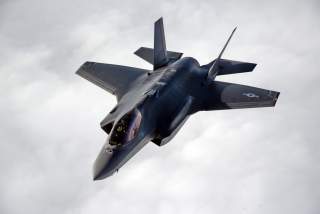 The Polish government announced late last month that they intend to modernize the bulk of their aging Soviet-era air force with 32 F-35 fighters, purchased in two batches over the coming decade. “Today we sent a request for quotation (LOR) to our American partners regarding the purchase of 32 F-35A aircraft along with a logistics and training package," announced Polish Defence Minister Mariusz Blaszczak. Blaszczak added that "this is a crucial decision that will raise our Air Force to a higher level. The first squadron of F-35 aircraft will be purchased by 2026, the second squadron after 2026.”

F-35 procurement is a competitive process that ranks program partners according to “levels,” from 1 to 3, corresponding to their financial stake in the fifth-generation fighter’s development. Poland, along with Romania, Switzerland, Spain, and others, are not F-35 program partners and therefore occupies the lowest procurement priority. But as previously described by The National Interest, Poland seeks to leverage bilateral ties with the US to skip the competitive process altogether.

It now appears that Warsaw is seeking to capitalize on the breakdown of the Turkey-NATO defense relationship on the heels of Ankara’s decision to purchase S-400 missile defense systems from Russia. As a level 3 partner, Turkey would normally have been entitled to purchase the F-35 well before Poland. But with F-35 transfers to Turkey suspended indefinitely and Turkish suppliers being phased out of the F-35 program over the course of 2020, Warsaw believes that it can take Ankara’s place in the proverbial queue. As a defense industry told Russian state news, “Poland, so to speak, is in the queue for these planes, and even if the United States wants to sell these planes to Poland, under normal conditions, Warsaw did not have a chance to get them before Turkey. And now Turkey will simply be removed from the queue.”

Poland’s line of reasoning is not wholly unfounded. Turkey’s imminent removal from the F-35 program will leave Lockheed Martin short of 100 fighters or roughly 20% of all F-35 sales to Europe, a gap that Poland and several other European nations are eager to fill.

There is, however, a significant caveat. Turkey’s withdrawal from the F-35 program is not yet a foregone conclusion. As recently as late last week, under-secretary of defense for acquisition and sustainment Ellen Lord signalled Washington’s willingness to come to terms with Ankara: “None of the steps we are taking are irreversible. If Turkey chooses to forgo delivery of the S-400, we look forward to restoring normal program activity.” Turkey’s reinstatement as a F-35 program member remains a possibility, albeit an increasingly slim one; if so, this may jeopardize Warsaw’s ability to procure the F-35 as rapidly and in the large quantities that it originally intended.

Regardless of any preferential treatment in getting bumped up to the front of the line, Poland must still pay the full procurement sum-- judging by Belgium’s recent contract for 34 F-35’s, the acquisition can be expected to come in at a total combined cost of around $4 billion.

Nonetheless, Warsaw remains committed to revamping its air force at part of a sweeping, 55 billion dollar military modernization program to be completed by 2032. Two squadrons of 32 F-35’s would not only guarantee Poland one of the most formidable fleets in NATO’s half of eastern europe, but streamline Polish integration into NATO’s defense architecture for purposes of joint military exercises and combat operations.