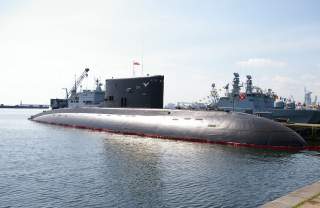 Key Point: Many of the newest members of the NATO alliance lack meaningful naval forces, this despite the same countries being close enough to Russia to be potential targets of Russian invasion from the sea.

But the Polish and other Baltic navies need to modernize if they hope to be able to deter and defeat what Young characterizes as a “resurgent Russia.” Russia’s Black Sea fleet played a major role in the country’s 2014 invasion of Ukraine’s Crimean Peninsula.

The sea is shallow (two hundred feet on average, which has earned it the nickname in German of the “flooded meadows”), registers low salinity and visibility, and experiences wide temperature variations. It is also quite busy, with some 2,500 ships under way at any one time. These factors combine to produce a complicated hydroacoustic environment for antisubmarine warfare. The Baltic Sea also has the unique distinction of being home to between forty and fifty thousand sea mines still unaccounted for from the two world wars.

From a Western perspective, the Russian-controlled Kaliningrad Oblast located between Poland

and Lithuania has become highly militarized. It contains the S-400 surface-toair missile system and surface-to-surface missiles. According to some sources, from this oblast Russia is capable of carrying out an anti-access/area-denial campaign in a conflict with NATO.

According to Young, the Polish navy is best positioned to grow and improve. “It consists of two former [U.S. Navy] FFG-7 frigates, three operational (albeit aged) ex-Norwegian Type 207 submarines, one Kilo-class submarine and many legacy warships and support ships,” Young wrote.

“It is in the process of commissioning a newly-built offshore patrol vessel (MAKO A100 class); it possesses [surface-to-surface missiles], Link 11 [datalinks] on some of its vessels and Link 16  secure datalink systems at its maritime operations center and maritime component command in Gdynia; and it plans to procure Link 16 for new maritime platforms and helicopters.”

“In terms of weapon systems, the Polish navy currently possesses and fields a number of types of SSM and [surface-to-air missile] systems, such as the Norwegian-manufactured Naval Strike Missile, RBS-15 Mk 2 and Harpoon SSMs, as well as RIM-67 Standard systems,” Young added.

The smaller Baltic states, by contrast, lack major ships and meaningful potential for naval expansion. “Estonia falls short in relation to other countries in the region because it has conflicting jurisdictional authorities between the ministry of defense and civilian law-enforcement agencies,” Young explained.

“As a result, development of one of the most basic capabilities needed to effect maritime security—a [risk-management plan] to produce maritime situational awareness—has been stalled for years by bureaucratic disagreements over ministries’ respective institutional roles.”

The other two Baltic navies, those of Latvia and Lithuania, possess both [mine-countermeasure] vessels and purpose-built patrol craft. They are fortunate in that—as is the case with Finland, Denmark and Norway—their national maritime-surveillance infrastructure falls under their respective defense institutions.

Thus, each possesses an RMP in which the navy plays the leading role. Latvia’s coast guard falls under the navy, but inexplicably it purchased four Skrunda-class patrol vessels that carry only light machine guns, although they do have mission-modular weapons potential.

The Lithuanian navy possesses four ex–Danish navy Flyvefisken-class patrol vessels, two of which possess variable-depth sonars that enable them to conduct some ASW training. These are the most capable warships in the Baltic States, as they possess modern combat-management systems and are armed with 76-millimeter guns. Further, consideration is being given to fitting them with ASW mortars or depth charges from regional sources to complement their sonars.

In principle, both navies also have dedicated minelaying capabilities using ex-Norwegian Vidar-class minelayers, but whether they have mines in sufficient numbers and can execute fast minelaying tasks is unknown. Missing from these navies are critical enablers and weapons: missiles, torpedoes and Link 11 or Link 16 (although the Lithuanian navy is investigating procurement of the latter).

Most disturbing is a seeming inability of these three Baltic States’ governments to agree on something as simple and important as developing a common regional RMP, and each apparently is on its way to developing its own unique intelligence, surveillance and reconnaissance capabilities.

To stand up to Russia, NATO’s newer and smaller members need to get serious about building naval power, Young advised.

And the alliance’s bigger, more-established members must help, he wrote. “Fundamentally, Western governments need to change their languid approach to their advice and assistance programs to provide improved aid to the new navies as they modernize and otherwise transform themselves.”