400 Meters Apart: India Is Massing Tanks On The Border With China 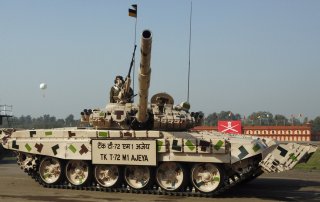 The People's Republic of China's People's Liberation Army (PLA) and the Indian Army have spent the past several months staring each other down along the Line of Actual Control (LAC) in the Ladakh Valley, and both sides have massed armor and other equipment in the region.

However, India may have secured an early advantage should the two sides actually engage in combat. The Indian Army deployed numerous T-72 tanks on some of the heights south of Pangong Tso. Those tanks reportedly moved to higher ground and potentially better defensive positions in late August and likely have spent nearly the two past months enhancing the positions.

According to a report cited by the Indian news outlet Swarajya, "After a quick clearance from Delhi, Indian Army's Northern Command also deployed T-72 tanks on some of the above-mentioned peaks, once again catching the Chinese unawares."

The PLA responded in kind and also deployed its tanks close to the Indian positions. By some accounts, Indian and Chinese tanks could be as little as 400 meters apart.

"The PLA also moved tanks close to Indian positions in this sector," the report from New Delhi noted. "Now, in what must be a first anywhere in the world, tanks from both sides are some 400 meters apart at an altitude of 16,000-plus feet, ranged against each other, their barrels facing backwards."

Tensions have been high since some 20 Indian Army soldiers, including infantry Colonel B. Santosh Babu, were killed in a violent face-off with Chinese troops in the Ladakh's Galwan Valley in June. There have been several high-level meetings conducted between military leaders of both nations to deescalate the situation, with the most recent one held on October 15.

A Build-Up in the Himalayas

Even as both sides have tried to allow cooler heads to prevail, over the summer and early autumn both sides have essentially been preparing for war. In July China moved artillery pieces, heavy vehicles and construction materials in key positions close to the LAC that separates one Indian union territory, the Kashmiri Himalayan region of Ladakh, and four Indian states, from the Chinese-controlled Tibet Autonomous Region.

The Chinese incursion came not-so-unexpectedly after India revoked Jammu and Kashmir's autonomy in August 2019. Prior to that time, Kashmir was then divided into two parts, Ladakh and the region of Jammu and Kashmir. New Delhi's move enraged both China and Pakistan.

India has countered the Chinese build-up and the Indian Air Force has ferried in equipment via heavy-lift aircraft, and that included numerous T-72 and T-80 tanks, along with BMP-2 armored personnel carriers (APC). All of the vehicles have been modified and adapted to run on a special fuel mix designed specifically for the high altitudes and low temperatures of the region.

Both sides have also prepared winter quarters for the troops, and despite the fact that temperatures could fall to minus 40 degrees Celsius it seems that now it is simply a waiting game to see if either side will back down.