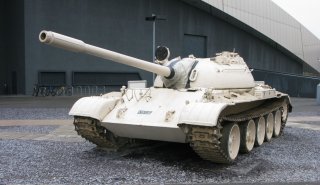 Over the span of the Cold War, Western military observers have tended to focus on Soviet weapons and military hardware—rightly so, given the immense output and consistent innovation of the Soviet military-industrial sector. Still, the other Warsaw Pact members made significant contributions in their own right. Here are five of the most noteworthy.

Czechoslovakia’s vz. 58 7.62×39mm rifle outwardly resembles the classic Soviet AK-47, but this is a rare case where similar looks are highly deceiving. The vz. 58 is, in fact, built on a completely different operating mechanism and from thoroughly different internal components—not even the magazines are the same. Notably, the vz. 58 is almost half a pound lighter than the original AK-47. Intended for the Czechoslovak armed forces, the vz. 58 came in two variants: the standard “infantry” version, and the “airborne” version with a folding metal stock. The vz. 58 was successful enough to spawn numerous variants, including both commercial products as well as derivatives used by militaries across the third and second world.

Produced between 1955 and 1957, the T-54A main battle tank (MBT) posed a slight improvement over the original T-54. The latter carried a new 100 mm D-10T tank gun, improved communications suite, and minor engine tweaks for marginally better performance—the subsequent T-55 boasted further improvements still. Over the course of the Cold War, Czechoslovakia laid the groundwork for a formidable industry of licensed T-54A and T-55 variants. Boasting a wide range of improvements over their original Soviet counterparts, Czechoslovak MBT’s became well known for their high-quality standards and grew to be a stunning export success; hundreds of Czechoslovak T-55M’s, T-55AM2’s, and T-54A’s made their way to Cambodia, Angola, Iraq, Egypt, Georgia, among others. A total of over Czechoslovak 10,000 T-54 and T-55 variants were produced from the late 1950’s to the early 1980’s.

One of the more successful variants of the prolific Soviet AKM assault rifle, East Germany’s MPiKM is distinguished from the original by a series of minor production changes that include the use of a plastic butt. Precise numbers tend to vary, but estimates show that up to four million MPiKM models were manufactured. There is no indication that the MPiKM was as widely exported as some of its other AKM counterparts, but hundreds of thousands of these rifles did make their way through the Middle-East and Africa following the collapse of the Berlin Wall and German unification.

Produced in the early 1960’s by prominent Czechoslovak manufacturer Česká Zbrojovka—better known to Western gun enthusiasts by the name CZ—the Škorpion has distinguished itself as a versatile and decently reliable machine pistol over its six decades of service. Originally produced for security services, the Škorpion has also found widespread use as a military sidearm. As with other successful Czechoslovak military hardware, the Škorpion became an export hit across the third and developing world; a small selection from the Škorpion’s vast list of past and current operators includes North Korea, Libya, Lebanon, Afghanistan, and Vietnam.

Whereas the Czechoslovaks developed formidable rifles based largely on original designs, the Hungarians opted instead for a series of close Kalashnikov variants. Contrary to popular belief, these rifles were not purely built with imported Soviet components. Starting from the Hungarian Ak-55, Hungary’s defense sector demonstrated remarkable resourcefulness in sourcing such components as high-quality beech and specialized sights to pump out an impressive amount of rifles. In what should by now be a familiar story, thousands of these weapons made their way to the Middle East over the course of the Cold War.