5 Movies That Lie To You (Thanks to Foreign Propaganda) 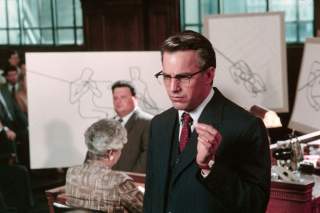 China has long used propaganda in its efforts to undercut American power. Usually, it’s been subtle—a stiletto hidden beneath a velvet sleeve. But Beijing now appears to think it’s time to jump the shark.

Hence, their outrageous claim that Beijing has “led” the global response to the pandemic. Another Chinese whopper holds that the U.S. spread COVID-19 to China.

Cleary, Beijing’s war of words against the United States has entered a new phase.

The United States has been pushing back, and rightly so. Too often in the past we’ve seen anti-American propaganda peddled as truth and ultimately become a part of Hollywood-movie lore.

#5. JFK (1991). Terrified that Lee Harvey Oswald’s Russian connections would lead to trouble, the Kremlin immediately created a cover story that the CIA had murdered the president. The disinformation plot was detailed by a former East Bloc intelligence officer. But years later, director Oliver Stone made a movie that treated every bit of the KGB canard as gospel.

#4. Promised Land (2012). Gus Van Sant directed this clunker that claims fracking does all sorts of evil things—setting your bathtub water on fire is just the beginning! Turns out Promised Land was financed in part by Image Nation Abu Dhabi, a subsidiary of Abu Dhabi Media. And who owns Abu Dhabi Media? The United Arab Emirates. Surprise! The picture deservedly bombed, making back at the box office less than half the production costs. But the hysterical badmouthing of fracking endures, even in presidential debates.

#3. Abominable (2019). In this computer-animated film directed by Jill Culton, cute girl meets cute Yeti and from there it’s a buddy-road picture back to Tibet. Dreamworks got body-slammed when co-producer Pearl Studios, based in Shanghai, snuck in an infamous “nine-dash line” map bolstering China’s claim over the whole South China Sea. Needless to say, none of China’s aquatic neighbors was pleased.

#2. Wolf Warrior 2 (2017). Chinese martial arts actor Wu Jing directed himself in what is the second highest grossing film in history. It’s the story of a Chinese soldier in Africa, where (so the story goes) Beijing’s influence everywhere is positive and benign and the United States is the root of all evil. This portrayal is not confined to the big screen. Chinese government officials like Lin Songtian, the Chinese ambassador to South Africa, make these kinds of claims all the time.

#1. Olympia - Festival of Beauty (1936). Leni Riefenstahl’s “documentary” on the Berlin Olympics stands out as the biggest lie in the history of cinema. Just watch it and you’ll agree—the Nazis were just a bunch of fun-loving guys in shorts. (At least this generation has JoJo Rabbit (2019) to remind them that Hitler was anything but a regular guy.)

The world’s worst like nothing better than to sneak their big lies onto the silver screen. We should all worry about fake news, deep fakes and the deep state, but we should never forget that the biggest lies are often passed off as entertainment. Right now, the worst of the lot may be China. So, ticket-buyers beware.