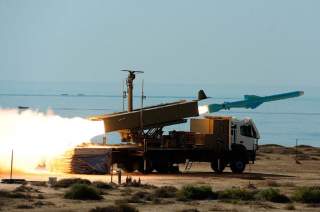 Iran has, experts say, “the largest and most diverse ballistic missile arsenal in the Middle East.” Developed with Libyan and North Korean aid, the Iranian missile program now boasts a range of weapons that can reach Israel and many other targets around the region.

Israel has its hands full at the moment in Gaza. But Gaza’s rockets aren’t the only thing that keep Israeli strategists up at night.

Last week, the nuclear talks between Iran and the P5+1 were extended into late November. A deal is still a very real possibility. But failure is, too. There’s broad agreement across the Israeli political spectrum that letting Iran get the bomb is an unacceptable risk. Many in the Israeli national-security establishment, particularly around Prime Minister Benjamin Netanyahu, have entertained the notion of an Israeli strike on Iran’s nuclear facilities if diplomacy fails and Iran makes a move toward the bomb. Iran would surely retaliate.Iran has a problem, though. If you’ve looked at a map lately, the Islamic Republic doesn’t share a border with the Jewish state. They’re more than 550 miles apart at their closest, and the two countries’ cores are nearly one thousand miles apart. That’s a big challenge for Israel, whose powerful air force would have to fly to the limits of its range just to reach Iran’s nuclear facilities. But it’s a bigger challenge for Iran, whose air force, held back by decades of sanctions, is far too feeble to break into Israel’s well-defended airspace.