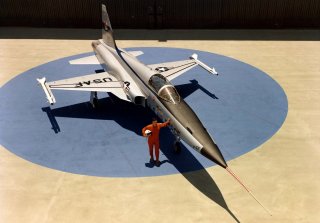 It has been sixty years since the first prototype of the Northrop F-5 family of lightweight fighter-bombers took its first flight on July 30, 1959. The F-5 played an important but understated role in the Vietnam War and continues to fly today—albeit with updated equipment—with some air forces and private combat flight training contractors, proving its capability to compete with some of the latest technologically superior light fighters.

The F-5 was developed by Northrop as a lightweight supersonic fighter that is both cheap to run and acquire. It first flew in 1959 and was selected in 1962 by the U.S. Department of Defence for export to friendly countries under the United States’ Military Assistance Program (MAP), providing a cost-effective, easy to operate and maintain light fighter aircraft for countries of the Free World during the hot years of the Cold War. It was nicknamed the Freedom Fighter.

The Freedom Fighter has a unique combat operations evaluation—it was tested in the jungles of South Vietnam conducting dangerous close air support missions. Initially, under Project Sparrow Hawk, the F-5’s crew and ground support personnel were tested and trained for its operational capabilities at Eglin Air Force Base, Florida. After completing and passing its initial operational test, a few improvements were made on the F-5A/B which included the addition of an air-to-air refueling probe and 90kg of the cockpit and engine armor, which would prove valuable in its survival as a close air support aircraft in Vietnam.

The improved F-5s were designated as F-5C/D and sent to South Vietnam for combat evaluation in July 1965 under Project Skoshi Tiger (‘Little’ Tiger in Japanese). During its combat evaluation phase, F-5s conducted thousands of Close Air Support (CAS) missions, delivering bombs, rockets, napalm, and 1.5 million rounds from its 20mm cannon. Its ability to fly fast and low, along with its small size, made it a hard target for anti-aircraft artillery (AAA) to hit, making the plane an excellent choice in the CAS role. The Skoshi Tigers, after combat evaluation by the U.S. Air Force (USAF), were passed on to South Vietnam’s air force and fought in the Vietnam War until 1975.

The F-5 Freedom Fighter was widely exported to many countries, including Turkey, Greece, Iran, Taiwan, South Korea, Thailand, Norway, Spain, and Canada. It was also produced under license in Canada, South Korea, Spain, Switzerland, and Taiwan. The Freedom Fighter was developed further based on its combat experience in Vietnam into a much-improved version known as the F-5E Tiger II which was produced in the mid-1970s. The Tiger II enjoyed brisk sales as an effective lightweight supersonic fighter-bomber. The F-5E/F has longer range, carried a slightly heavy payload, and improved air-to-air capabilities compared to the F-5A/Bs. The Tiger II also has a reconnaissance version, the RF-5E, which was produced in limited numbers.

The F-5 family of fighters—refurbished with up-to-date weapons, new avionics and electronic sensors, low operational costs, easy maintenance, good reliability, and proven combat flying capabilities that can match some modern fighter jets—demonstrate the enduring characteristics and character of what a well-designed combat aircraft from the start could achieve. The viability of modernizing selected low-operational-hour F-5 platforms also provides an attractive option for some smaller air forces with limited budgets to attain a light, agile and proven fighter aircraft, which will most likely see no real action but able to give its pilots much-needed experience in operating fast and highly maneuverable jet fighters.

Adam Leong Kok Wey is an associate professor in strategic studies, and the Deputy Director of Research in the Centre for Defence and International Security Studies (CDiSS) at the National Defence University of Malaysia. His latest book is Killing the Enemy! Assassination operations during World War II, published by Bloomsbury (2020).