65,000 Tons of Battleship Terror: The Navy Wanted to Build One Last Batch of Super Warships 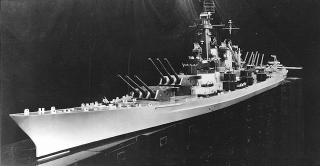