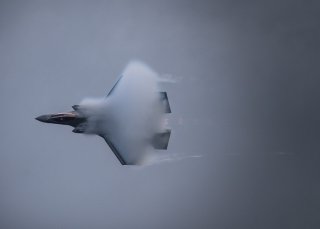 The nascent yet already airborne 6th Generation stealth fighter could evolve into two separate variants tailored to perform attack, reconnaissance, and networking missions in specific theaters of operation such as Europe and the Pacific.

The Air Force’s Next Generation Air Dominance 6th-Generation stealth fighter, now years ahead of schedule having already flown, is expected to fly alongside the F-35 while also advancing new technical paradigms for air superiority in the realm of stealth attack, speed, AI-enabled computing, sensor sophistication, targeting, and air combat maneuver.

Very little is known about the aircraft for obvious security reasons, yet there is great promise and anticipation regarding its arrival given the scope of technological advances and the Air Force need for new platforms. Digital engineering, coupled with years of conceptual work, computer simulations, and early subcomponent prototyping have fostered what could be called an accelerated trajectory.

Now, given the tactical and strategic dynamics unique to both the European and Pacific theaters, there are certainly interesting reasons why separate 6th-Generation variants might prove to be a useful and relevant approach. Air Force Chief of Staff Gen. Charles Brown agrees. When asked about the prospect of two variants at this year’s Air Force Association symposium, Brown was clear not to specify any particular plan for the emerging stealth jet, but he did not dismiss the possibility and at least seemed open to the idea, saying “we need more range in the Pacific, as the Pacific is much larger than Europe.”

While Brown and other senior Air Force leaders did not say anything regarding specific plans for the 6th Generation, apart from the general fact that it is developing well and of great importance, yet the prospect of two variants introduces some interesting variables for consideration.

The possibility raises some interesting engineering and aerodynamic questions of great relevance, as a stealth fighter might certainly need a slightly different configuration should it need to be built for extra range. Would larger fuel tanks add weight? Impact maneuverability? Perhaps to some extent, yet much is discussed in terms of the “tyranny of distance” known to characterize the vast expanse that is the Pacific, and there may be ways to extend range without adding any bulk or drag. Certainly, these dynamics have been studied for years and informed current cutting-edge systems such as the F-22 and F-35 engines.

From the Korean peninsula through Japan, Southeast Asia, the South China Sea, and Australia, surveillance and attack missions, not to mention the distances between launch locations in friendly countries such as Japan or Australia, certainly might require extended range technology. This might be particularly true in high threat environments where stealth might be of great significance, meaning less stealthy tankers might have much more difficulty operating without being detected and shot down, due to newer far more advanced air defenses. Given this circumstance, a 6th-Generation aircraft would seem to need to be both stealthy and engineered with new levels of range capacity. Interestingly, there are certainly instances wherein new engine technology can massively enhance fuel-efficiency, so perhaps that is an area of focus.

Also, given the amount of ocean in the Pacific, perhaps the carrier launched MQ-25 Stingray refueler might prove significant in so far as it could take off from an otherwise inaccessible ocean location to fly up and refuel stealth fighters en route to an attack mission.

There is also precedent for stealthy-looking conformal fuel tanks, such as those on the F-15EX or variants of the F/A-18 Super Hornet. It would seem feasible that engineers might find a way to reach new speeds, yet with greater fuel efficiency to enable longer mission scope and dwell time. For instance, what if 6th-Generation fighters needed to take off from Guam or Australian bases even further south, for attack and reconnaissance missions North of the Korean Peninsula?

The Air Force also has, for many years now, been working with GE and other industry partners on a next-generation engine program called Adaptive Versatile Engine Technology specifically intended to increase range, speed, and fuel efficiency. It certainly seems feasible some of the innovations emerging from this program, which goes back to 2015, could prove impactful.

While helicopters are of course quite different from fixed-wing stealth fighters, yet perhaps if only in concept the Army’s initial success with Future Vertical Lift seems to suggest that it is possible to both greatly increase speed while also doubling range beyond a legacy platform. Newer Apache variants, as well, have been engineered with more fuel-efficient 701D engines and a technology called Improved Turbine Engine Program. In short, engine and propulsion technologies could be an area of focus.

Also, given the amount of ocean in the Pacific, perhaps the carrier launched MQ-25 Stingray refueler might prove significant in so far as it could take off from an otherwise inaccessible ocean location to fly up and refuel stealth fighters en route to an attack mission.

How might a European variant be different? Certainly having less of a need for massive ranges might open up some design options for thrust, speed, maneuverability regarding a variant engineered for shorter missions. Eastern Europe, for example, which already has U.S. drones and F-35s, is very close to the Russian border. A European launched fighter jet attack mission could also reach parts of the Middle East, yet regardless most if not all of the European continent would be more easily accessible, should there be a need for rapid air-to-air engagement. Perhaps a European variant might more closely resemble the F-22 in terms of mission scope, with a premium placed upon aerial maneuverability, speed, thrust vectoring, and air-to-air engagement? A European 6th-Generation fighter might perhaps be built with a mind to being able to defeat a 5th-Generation Russian Su-57. Whereas a Pacific variant might more closely resemble an F-35-like mission scope with advanced ISR and more multi-role capability. Naturally a 6th Generation fighter, it would seem, would aim to change the paradigm for air superiority by moving beyond both the F-22 and F-35. A Pacific variant might be engineered to defeat a Chinese J-20 or J-31. Regardless, one interesting factor to consider is that, with ongoing upgrades, the F-22 and F-35 are expected to fly into the 2060s and beyond and therefore complement and fight alongside the new 6th-Generation aircraft.