$700 Billion: The Cost to Consumers if the Government Regulates Google 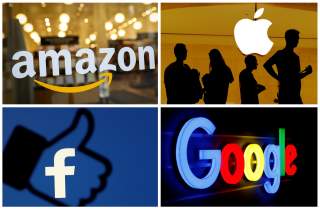 What would the tech industry look like if it were more regulated? It would become something billions of people around the world are saying they do not like.

Not that anyone pressing new regulations for big tech would admit this. Advocates for regulation argue that regulation will only make things better. They claim that regulation would result in more innovation, more competition, and greater democracy, with no loss of current services.

But these are marketing claims made to sell the public on regulation. We have real world examples of the types of companies that advocates would like tech leaders to become. And billions of consumers say they don’t want them. Here are three examples.

In a recent National Constitution Center podcast, an advocate for regulation said he would like for Amazon to be like eBay. Customers strongly disagree.

These statistics tell us that Amazon and eBay serve different customer needs. So turning Amazon into an eBay would make US customers about $167 billion worse off on an annual basis. (For those interested in the math, Amazon’s per person value is $234.6 billion in sales / 206.1 million users. eBay’s is $35.6 billion in sales / 109.4 million users. The difference between the per person values times Amazon’s 206.1 million unique users is $167 billion.)

There are a few examples of Facebook-like social media sites that appear to work as regulatory advocates would like Facebook to function. One reviewer ranked Ello and Vero as the two best for 2019. Would consumers like for Facebook to be like these alternatives? Apparently not. In total these Facebook substitutes serve less than 10 million users: Ello has either 1.5 million or 4 million users, and Vero has either 1 million or 3 million users, depending on who you ask. The total is less than 1% of Facebook’s 2.4 billion users, each of which has declined to make Ello or Vero his or her social media site.

Given the lack of interest in Ello and Vero, Facebook users’ best alternative to Facebook appears to be an information flea market, as some social media pundits have said (here and here). So if Facebook’s platform was reduced in value to the level of an Ello or Vero, users would likely opt to obtain services from multiple sources, similar to shopping at a flea market. Each user would have to sign up for sites for photo sharing (maybe Google photos), messaging (maybe Signal), news (maybe Twitter), stories sharing (maybe Snapchat), group discussions (maybe GroupMe), etc. No wonder users value Facebook so much.

How valuable is Facebook to users? A 2018 academic study estimated that Facebook is worth about $1,000 per year to its average user. For the 169.5 million US Facebook users, that is about $169.5 billion in annual value that could be destroyed by regulating Facebook.

Winding back the clock on search

Google provides around 90% of organic search worldwide (see here and here). The two next largest organic search engines are Bing (4-6% share) and Yahoo! (3-4% share), both of which launched before Google.

What would be the economic loss to US users if Google were regulated into looking like its nearest rivals? Nearly $380 billion annually. This considers the value that consumers place on search, their relative satisfaction with Google compared to its rivals, and Google’s share of organic search. (For those interested in the underlying math: Erik Brynjolfsson, Felix Eggers, and Avinash Gannamaneni estimatethat users would be willing to pay $17,530 annually to use search engines. Assuming 236.5 million search users in the US for 2019 and an 88% Google share in the US, $3.648 trillion is the consumer surplus for Google searchers. To adjust this to a net value of Google, multiply the $3.648 by the percentage difference between the average consumer satisfaction scores for Yahoo! and Bing of 73.5 and the Google score of 82, i.e., 1 – 73.5 / 82.)

At the same time that Congress is considering forcing tech platforms to reflect the value of data in their accounting records, it is pondering regulations that could destroy over $700 billion of economic value on an annual basis. So why does regulation have momentum among political leaders in both parties? Voters probably don’t realize what they will lose.

Mark Jamison is a visiting scholar at the American Enterprise Institute, where he works on how technology affects the economy, and on telecommunications and Federal Communications Commission issues. He is concurrently the director and Gunter Professor of the Public Utility Research Center at the University of Florida’s Warrington College of Business.

This first appeared in AEIdeas here.