75 Million And Counting: Why the AK-47 May Never Stop Shooting 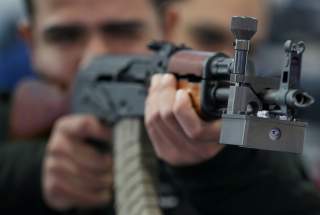 In his book The Gun, author C. J. Chivers describes the heady post-war years of the mid 1940s, when the scramble to enter the atomic age was defined by enormous technological challenges, and when a humble Russian arms designer name Mikhail Kalashnikov would create something that would turn his name into veritable brand.

“The world had yet to develop a reliable and lightweight automatic rifle, a firearm that could fire at the rate of a Maxim gun out to typical combat ranges and yet be managed by a single man. Throughout fall 1945, Sergeant Kalashnikov and a larger design collective had worked on a submission for the contest’s first phase, which required competitors to submit a packet of technical specifications. The Main Artillery Department wanted a weapon that fired like a submachine gun but out to greater range. It issued the guidelines. The weapon must be compact, lightweight, highly reliable, simple to manufacture, easily operated, and composed of a small number of independent parts. And it must fire a new cartridge, only recently designed by Soviet ammunition experts. Sergeant Kalashnikov’s team made hundreds of sketches, detailing each of the proposed weapon’s main parts, trying to put a practical form to the commission’s request.”

Kalashnikov, who’s father had been declared a Kulak, and who’s family had grown in abject poverty, won the design competition to create the Soviet Union’s standard-issue rifle.

It’s So Easy, A Caveman Could Do It!

“Of the estimated 500 million firearms worldwide, approximately 100 million belong to the Kalashnikov family, three-quarters of which are AK- 47s,” wrote Phillip Killicoat, of Oxford University. Not bad for an arms designer with virtually no formal training.

It may not be as accurate or shoot as far as other rifles, but it can take an enormous amount of abuse, requires very little time and effort to maintain, and is dirt cheap.

While much has been made about the Russian Federation’s S-400 exports, and other cutting-edge hardware, their bread and butter remain equipment destined for conflicts that don’t require fighting a nuclear-armed opponent that can field top-of-the-line equipment. The Soviet Union, and now Russia, excel at exporting weapon systems that are simple, robust, and easy to maintain for customers or partners that need a lot of firepower on the cheap.

The market for such a weapon is enormous, and unlikely to disappear any time soon. As they say, “If it ain’t broke — don’t fix it!”