8 Wars the United States Should Never Have Fought 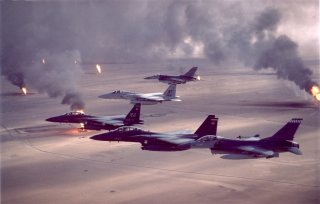 A study of the outcome of major wars fought over the past 125 years strongly suggests that U.S. military involvement in these conflicts has resulted in tragic and unforeseen consequences. Not only has U.S. involvement led to millions of unnecessary deaths but it has also served to create new enemies, thus making the U.S. much less safe and secure. Here is a list of major wars, that in retrospect, the United States never should have fought in order to produce a far more successful outcome from the standpoint of U.S. national security:

Many historians have concluded that it is quite unlikely that Spain was responsible for sinking the battleship USS Maine, which served as the catalyst for the U.S. declaration of war against Spain. U.S. involvement in this war transformed it into a colonial empire as it took control of the Philippines and fought a three-year-long war with Filipino nationalists that cost the lives of 220,000 Filipinos. It also resulted in U.S. military forces being stationed outside the Western Hemisphere for the first time in U.S. history—making an unnecessary conflict with Japan much more likely.

U.S. military involvement in this war essentially prevented Britain and France from becoming bankrupt and exhausted militarily by the conflict and being forced to negotiate a far more just and equitable compromise peace agreement. Such an agreement would have prevented Nazi Germany, Communist China, and perhaps even the Soviet Union from ever existing, saving the lives of hundreds of millions of people who were mass murdered by those totalitarian regimes or who died in wars they started. With the U.S. tipping the scales heavily against the Central Powers, the result was that Imperial Germany was forced to accept the vengeful and punitive Treaty of Versailles that crushed the German economy, deprived it of 12-13 percent of its population and territory, broke it in two with the creation of the so-called Polish Corridor, and deprived it of its ability to defend itself against invasion by even small countries like Belgium that subsequently invaded it with impunity. This agreement was imposed upon the defeated Germans upon threat of an immediate French-led invasion and occupation of their entire country. The Germans were forced to accept these harsh terms even though their surrender had been expressly conditioned upon a peace under President Woodrow Wilson’s Fourteen Points. Had the Germans realized the unjust terms that the Allies planned to impose upon them, they likely would have fought considerably longer.

The U.S. war in Vietnam had an undeniably just cause which was to defend the Republic of South Vietnam from Communist takeover. However, Vietnam was never a U.S. vital national interest and the loss of 58,000 soldiers killed in action was not justifiable and did nothing to further U.S. national security. This is particularly the case given that Communist North Vietnam ended up annexing South Vietnam anyway, and the Communists took control of Laos and Cambodia as well. The Vietnam War proved to be the worst strategic mistake by U.S. leaders since President Harry Truman cut off all military assistance to the Nationalists in 1946 at a time when they were on the verge of winning the Chinese Civil War—leading mainland China to fall to the Communists instead.

The First Gulf War in 1991 was unnecessary, not only because Saddam Hussein did not threaten an invasion of Saudi Arabia, as President George H.W. Bush claimed, but also because he issued a number of peace offers, including one to withdraw from all of Kuwait, except for the Rumalia oil field and the Bubiyan Island. Yet even had Saddam not offered to withdraw his military forces, Iraqi control of Kuwait did not threaten U.S. national security in any way. In fact, it is notable that Iraq had been a U.S. client state up until the time it invaded Kuwait in August 1990 after getting “a green light” to invade from U.S. ambassador to Iraq April Glaspie. The U.S. decision to decimate the Iraqi military in the process of forcing it out of Kuwait greatly weakened Iraq’s ability to continue fighting its war against Iranian terror, which had been strongly supported by President Ronald Reagan. The ensuing UN embargo and U.S. bombings of Iraq continued for a decade after the war supposedly ended, causing the deaths of up to half a million Iraqi children. Most importantly, the U.S.-led war against Iraq also sparked a chain of events leading to Osama bin Laden’s attacks on the Twin Towers and the Pentagon on September 11, 2001. Of course, these events then resulted in an unnecessary U.S. Global War on Terror which cost the lives of several hundred thousand civilians spanning over two decades.

In 1999, NATO armed the Islamist Kosovo Liberation Army narco-terrorists and fought on the same side as Al Qaeda insurgents in their fight against the Yugoslav government, bombing government and military forces, including the capital of Belgrade. It was the first unprovoked act of NATO aggression, seemingly fought to give it a new purpose for existing following the collapse of the Soviet Union. In many ways, it might be said that this war, along with the expansion of NATO eastward into the former Warsaw Pact nations of Poland, the Czech Republic, and Hungary that same year, marked the key turning point in U.S.-Russian relations from a relationship defined by cooperation to one defined by conflict and confrontation. The subsequent replacement of Boris Yeltsin by Vladimir Putin as president of the Russian Federation at the end of the year signaled the commencement of Cold War II with Russia.

The 2003 U.S. invasion of Iraq to overthrow its secular Baathist regime was an entirely unprovoked, illegal war of aggression. As was proven following an exhaustive search for weapons of mass destruction lasting a full year, Saddam Hussein had destroyed his entire arsenal of nerve gas before the war. But even if he had not, he had no history of sponsoring terrorist attacks against the United States or Israel and posed no threat to the United States, which had 7,000 strategic nuclear weapons at the time. Iraq’s armed forces had been severely degraded, losing over 60 percent of their tanks and other heavy weapons during the previous Iraq War, and Saddam had not threatened his neighbors since the previous Iraq War ended. Due to the U.S. invasion and occupation of Iraq, Islamist terrorists including Al Qaeda and ISIS were able to establish a strong foothold in Iraq and spread their influence to Syria. Meanwhile, Iranian proxy Shiite Islamists took power in Iraq in a fraudulent election in 2005, spreading the Islamic Republic of Iran’s imperial influence further westward toward Israel. Estimates of the death toll stemming from the U.S. invasion of Iraq vary widely from a low of 151,000 to as many as 1,033,000 Iraqis. By comparison, Saddam is alleged to have killed up to 300,000 people during his near quarter-century reign.

U.S. military assistance to Islamist extremists and terrorists began with the CIA providing modern arms to the mujahadeen fighting the Soviet occupation of Afghanistan from 1979-1989. But this strategy extended far beyond Afghanistan into countries including Libya and Syria, even as the United States was fighting the so-called Global War on Terror. Specifically, in Syria, the United States provided military assistance to various Syrian rebel groups, many of whom consisted of Islamist extremists and had ties to Al Qaeda, in an effort to overthrow the Baathist regime of Bashar al-Assad. As a result of the conflict, as many as 610,000 Syrians are believed to have died—with many more displaced—and Russia and Iran have expanded their influence in Syria.

Another unprovoked NATO military intervention was in Libya. During the Libyan Civil War in 2011, NATO engaged in bombing Libyan government forces in a campaign that was reminiscent of the unprovoked NATO bombing during the Yugoslav Civil War in 1999 as well as the U.S. invasion of Iraq in 2003. NATO’s support of Islamist Libyan rebels successfully achieved regime change: overthrowing and killing secular Libyan dictator Muammar el-Qaddafi. However, NATO’s intervention then incited a devastating civil war, lasting several years and dividing the country among different, competing factions. Al Qaeda also built a significant presence in the country.

Had the United States employed a more realist foreign policy to avoid fighting unnecessary conflicts, the long-term adverse outcomes of these wars could have been averted and the number of adversaries that threaten U.S. national security greatly diminished. In addition, the implementation of such a policy would have likely served to prevent some wars from occurring altogether, saving tens of millions of lives. U.S. and NATO wars of aggression against Yugoslavia, Iraq, Syria, and Libya undoubtedly served to belie NATO’s claims that it is a purely defensive alliance with no offensive aims. Further, without the eastward expansion of NATO and the alliance’s bombing of Yugoslavia, it is very possible that this new Cold War with Russia and their subsequent invasion of Ukraine in 2022 would never have materialized. This would have particularly been the case if the United States and NATO had found a way to include Russia in some kind of mutual security arrangement to better integrate it into Europe and the West.