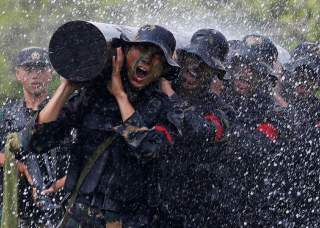 The People’s Liberation Army turned 91 today amid the Chinese media’s self-congratulatory cacophony. To be sure, China has a lot to be proud of—the PLA has become one of the most powerful militaries in the world. But lost in the hyperbole and hubris of the occasion is a sense of perspective. The PLA continues to be plagued by enduring weaknesses and significant challenges on the long journey towards its aspirations.

The PLA is currently on target to meet those goals. It has modernized rapidly on the back of almost two decades of double-digit growth in defence spending. Today’s PLA boasts some of the most advanced military capabilities in the world, including conventional and nuclear missiles, stealth fighter jets, unmanned aerial vehicles, space-based platforms, and a bulging navy. Moreover, China is investing heavily in transformative technologies with military applications, such as hypersonic vehicles, quantum science, and artificial intelligence.

But new hardware and technology aren’t enough in themselves to significantly raise combat effectiveness. Indeed, starting in 2015, the PLA has undergone the most sweeping and comprehensive reform program since the 1950s. That has had far-reaching consequences for its structure, force posture, and command and control systems.

Most importantly, the PLA has flattened its organizational structure. The four general departments that acted as intermediaries between the supreme Central Military Commission and lower-level organizations were abolished. The seven geographically based military regions were consolidated into five joint theater commands to improve joint operations.

At the same time, the responsibilities of the different parts of the PLA were clarified to eliminate ambiguities and overlaps. Under the new system, the Central Military Commission exercises overall leadership, the theater commands are in charge of operations, and the service arms are responsible for force development.

New PLA organizations were formed to enhance force composition and signal new priorities. That included elevating the PLA’s conventional and strategic missiles branch to a full service and creating the Strategic Support Force to carry out space, cyberspace and electromagnetic spectrum operations.

The PLA has also cut 300,000 personnel (mostly from the army) to make itself leaner. Shrinking the army is part of a larger effort to improve the PLA’s force structure by rebalancing resources to strengthen the navy, air force, and missile forces.

Despite these reforms, several weaknesses have endured. First and foremost, the PLA desperately lacks combat experience. Unlike the US military, for example, the PLA hasn’t fought for real since its disastrous campaign against Vietnam in 1979. PLA analysts have consistently highlighted the inability of its current rigid and formalistic training system to effectively address the situation.

Second, the PLA remain deeply corrupt and lacking in discipline as a professional military force despite Xi’s continuing purges within the military. The problems largely stem from the legacy of PLA involvement in commercial activities, and a lack of proper oversight.

Third, the PLA still lags on joint operations and power-projection capabilities despite steady improvements over recent years. The demands on the PLA to operate further from Chinese shores in the protection of the country’s interests have risen greatly, and will continue to rise in the years ahead. Key capability gaps, such as the lack of an effective anti-submarine warfare capability, must be filled if the PLA Navy is to build greater expeditionary capacity.

Fourth, the PLA will need to effectively harness and safeguard China’s space and information systems, which have become critical for both military operations and the civilian economy. This would involve sustained investment in space-based platforms as well as an counterspace capability with both kinetic and non-kinetic elements. To gain an information edge, the PLA will also need to prioritize the integration of its reconnaissance, defense and offense capabilities and operations in cyberspace.

Finally, the PLA will need to develop or enhance a diverse range of capabilities for operations other than war, such as humanitarian disaster relief and UN peacekeeping missions.

In the early 1990s, the US military’s display of overwhelming power in the Gulf War shocked and horrified PLA strategists. That’s no longer the case today. The PLA is increasingly confident in its abilities, including in deterring US and allied intervention over Taiwan or the South China Sea.

There’s no doubt that the PLA has come a long way. In fact, it is rapidly developing a full spectrum of capabilities across every domain of modern conflict. On the current trajectory, it is on target to reach parity with the US military by mid-century. However, it is also instructive to reflect on how the PLA’s enduring weaknesses might affect its ability to meet growing challenges. For one thing, the increasing demands of China’s strategic ambition may well outpace PLA modernization in the years ahead.

Adam Ni is a visiting fellow at the Strategic and Defense Studies Centre, Australian National University.