The AbramsX Is Ready for High-Speed Warfare 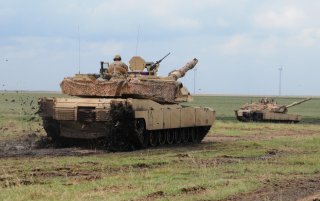 A future battlefield is expected to operate at much faster speeds and across more dispersed formations and circumstances. This requires heavily armored vehicles to improve maneuverability, speed, and fuel efficiency. Modular weight adjustability could prove extremely critical for a combat force that needs to cross bridges, keep pace with tactical vehicles, and require less fuel.

General Dynamics Land Systems (GDLS) is offering its new AbamsX demonstrator with all of these variables in mind.

“We think we can keep it at sixty tons with a certain level of armor or go higher if the Army wants. When you take the crew out of the turret and put it in the hull, you have this heavily armored turret without any people in it. That may be a place to save weight.  What we are telling the Army is you let us know what level of protection you desire in an unmanned turret, and we will let you know what that weighs,” Tim Reese, U.S. business development, General Dynamics Land Systems, told The National Interest in an interview.

It is possible that next-generation innovation in lightweight composites might allow for high levels of protection. This question will be important to the success of the AbramsX. Yet senior officials understandably do not discuss technical specifics regarding the maturation or readiness of new lightweight armor composites. Additionally, when it comes to breakthrough armor composites, something which has been an ongoing focus for the Army Research Laboratory, the AbramsX can increase its armor configuration as needed. The AbramsX is built with an unmanned turret and only a three-man crew which Reese says could enable optimal functionality and survivability.

“We have an unmanned turret so the crew is all down in the hull and they share a cockpit-style arrangement of control screens which allow them to do that manned-unmanned teaming with a ground vehicle or an aerial vehicle with that architecture that underlies all the electronics inside the tank. The other innovation is an autoloader for the 120mm cannon. The hybrid electric power pack gives you a pretty good extended period of silent watch capability where the engine is not running and a little bit of silent mobility,” Reese said.

Sensing and artificial intelligence (AI) are also critical to the success of the AbramsX, Reese added, because the vehicle is built with two independent thermal viewers on top of the tank. This will allow the commander and the gunner to have a 360-degree camera to gather incoming targeting data which can then be analyzed and transmitted by an AI-enabled Katalyst vehicle electronic architecture.

“There are two independent day/night viewers on top of the turret instead of one so now both the commander and the gunner each have their own 360-degree camera that they can scan the battlefield from and the turret does not have to move until they want to engage the enemy and then they can engage the turret controls so they are using a lot less of the battery power,” Reese explained.