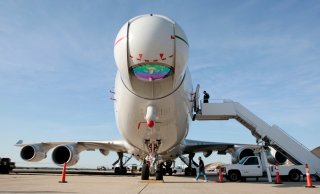 One of the Air Force's most feared gunships will soon be upgraded with a state-of-the-art laser, taking their ground support role to the next level.

The United States Air Force will soon outfit their AC-130 gunships with a novel new weapon: a laser. The Airborne High Energy Laser (AHEL), essentially a small podded laser weapon, would likely be mated to the airframe's side and serve alongside the other weapons the various AC-130 variants use to support ground troops.

The Lockheed Martin press release covering the AC-130 laser stated that the company "delivered the AHEL subsystem for integration with other systems in preparation for ground testing and ultimately flight testing aboard the AC-130J aircraft. In January 2019, Lockheed Martin was awarded the contract for integration, test, and demonstration on the AC-130J aircraft and is on a rapid schedule to continue testing this capability."

Lockheed Martin has several other laser weapon programs in development for the Department of Defense on behalf of the U.S. Navy, the U.S. Army, and another U.S. Air Force program.

In one interview, the Commander of Air Force Special Operations Command, Lt. Gen. Brad Webb, explained that one of the challenges to integrating laser weapons onto aircraft had been excessive vibration, especially in the AC-130 platform, that destabilized laser beams. However, once "jitter" could be overcome, laser weapons could play both an offensive and defensive role and be used to take out missiles, mortars, trucks, even opposing aircraft in theory.

"Without the slightest bang, whoosh, thump, explosion, or even aircraft engine hum, four key targets are permanently disabled," Lt. Gen. Webb explained. "The enemy has no communications, no escape vehicle, no electrical power."

"Completion of this milestone is a tremendous accomplishment for our customer," said Rick Cordaro, vice president, Lockheed Martin Advanced Product Solutions said in the company's press release. "These mission success milestones are a testament of our partnership with the U.S. Air Force in rapidly achieving important advances in laser weapon system development. Our technology is ready for fielding today."

Still, the AC-130 platform has served for over half a century. And though it has remained relevant through a slew of weaponry, fire-control, and sensor upgrades, the platform's future utility might be somewhat limited. For example, in a high-end fight against a peer or near-peer enemy with modern air defenses, the AC-130's non-stealthy nature, and relatively low flight speeds would leave the platform vulnerable to attack.

In the future, stealthy and expendable aircraft could replace gunships like the AC-130. And who knows—perhaps they'll also be armed with laser weapons.