Across the Pacific, the U.S. and Chinese Navies Are Competing on the High Seas 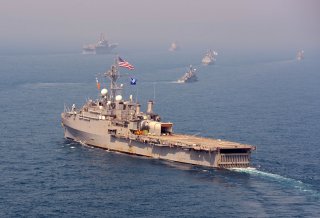 With China and the United States now seemingly locked in an era of great power competition, the U.S. and Chinese navies have been maneuvering in a series of “cat and mouse games” that show no sign of stopping anytime soon.

The U.S. Navy, for example, conducted “dual-carrier” operations in the Pacific last year to synchronize its air-power projection capabilities, exercise its increased sortie rates, and hone its multi-domain networking between the ships and their respective aircraft carrier air wings. Several months after this development, the Chinese People’s Liberation Army Navy (PLAN) responded with its first “dual-carrier” operations, in which it launched fighter planes from its first two carriers in coordination with each other.

The PLAN clearly seeks to counter the U.S. Navy’s forward presence in the Pacific Ocean, where the United States intends to maintain open access to international waterways and defend Taiwan from Chinese aggression. In fact, these are the primary rationales for the U.S. Navy’s maritime operations in the region and naval exercises with key allies such as Japan. Operating in close proximity to these key hotspots, the U.S. Navy intends to be close enough to respond with long-range cruise missiles and sea-launched fifth-generation F-35 stealth fighter aircraft. Indeed, used effectively, these assets could help the United States blunt, incapacitate, or even destroy a Chinese amphibious assault on Taiwan.

Of course, China is well aware of these dynamics and has conducted a series of live fire war drills in the South China Sea, East China Sea, and other areas throughout the region. For example, just last week, a large contingent of Chinese warships operated in close coordination with land-launched fighter jets to encircle and threaten Taiwan—a transparent effort to show the United States and its allies that China will not be easily deterred from advancing its interests.

Large scale, competing exercises and saber-rattling are just part of this equation, as individual Chinese and American warships often trail one another on patrol in sensitive areas throughout the Indo-Pacific. Recently, a U.S. Navy cruiser, the USS Port Royal, recently transited through the Taiwan Strait in an effort to express U.S. resolve in defending free navigation and Taiwanese autonomy. This U.S. ship was tracked, monitored, and closely followed by a Chinese warship, according to the Global Times, a Chinese government-backed newspaper. The Global Times reported that the Chinese warship “shadowed” the Port Royal through the strait and quoted Chinese military experts making threatening comments about the U.S. military’s defense of Taiwan.

“The US, Taiwan secessionists and other external forces that attempt to interfere in the Taiwan question must understand that the island is an inalienable part of China, and the PLA [People’s Liberation Army] has the determination and capability to safeguard national sovereignty and territorial integrity…” the paper quoted PLA senior colonel Shi Yi as saying, before adding that “…a single US warship can do nothing but make a political show.”

Certainly, the PLAN wants the United States to know that its ships will not sail alone in the western Pacific. As the Global Times report stated, Shi stated that “The PLA Eastern Theater Command organized forces, tracked and monitored on high alert the US vessel through its entire course.”