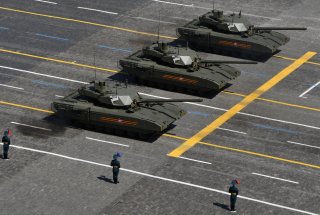 It has been more than six years since Russia unveiled its T-14 main battle tank (MBT), built on the Armata platform, at the Red Square Victory Day Parade. Russia initially planned to acquire 2,300 of the next-generation tank, but after production and fiscal shortfalls, the number was scaled back to just one hundred. Those vehicles are set to be delivered and deployed to the 2nd Guards Tamanskaya Motor Rifle Division next year.

However, those tanks will only be transferred following the completion of all state tests. While the goal had been to conclude those tests by the end of 2021, the Russian Ministry of Defense's Krasnaya Zvezda newspaper reported on Monday that the final trials will be concluded sometime in 2022. That means the 2nd Guards may have to wait just a little longer to receive their new tanks.

"The annual Army arms show features the T-14 tank, the T-15 infantry fighting vehicle and the T-16 armored repair and evacuation vehicle being developed under the Armata project," Chief of the Defense Ministry’s Main Automotive and Armor Department Major-General Alexander Shestakov was quoted in the article. "This year, it has entered its final stage. The tank's state trials are due to be completed in 2022."

More Than a Tank

Much of the focus has been on the T-14. But Shestakov said that the latest requirements of the Russian Defense Ministry require the Armata infantry fighting vehicles and armored personnel carriers to operate as a multi-purpose combat vehicle.

"Now it must not only transport personnel and support them by fire in a battle but also to fight enemy armor and low-flying air targets," he said. "As compared to its predecessors, the vehicle must effectively cope with this task not only from the halt but also on the move and afloat. Armament remote control is a priority task."

To embrace that role, the new platform will be equipped with an unmanned combat module that is currently in development. What this means for the eventual rollout of the platform isn't clear. However, the Armata has been a long time in coming.

Work on the project began in 2010, when the Russian Ministry of Defence terminated work on "Object-195" – its T-95 program. The Armata program has been regarded as a huge technological leap from Soviet-era military hardware designs. The T-14 is very much distinct from past Soviet/Russian tank platforms. The outline of the tank, from its hull to its long and boxy turret, which resembles Western tank turret designs, is a notable departure from past Soviet designs. The T-14 also features seven road wheels instead of the six wheels that were standard on almost all previous Soviet and Russian MBTs.

In addition to the T-14 MBT, the Armata platform also consists of the T-15, which was designed primarily as a transport to carry a dozen soldiers, including three crewmembers. Despite this, it was not quite an armored personnel carrier (APC), at least not the traditional sense of the U.S. military's Cold War-era M113 or its newer Armored Multi-Purpose Vehicle.

Nor is it an update to Russia’s BMP-3M infantry fighting vehicle (IFV), which was the latest update to a platform dating back to the early 1960s. The T-15 exists somewhere between an APC and IFV. There is no NATO vehicle comparable to the T-15; the closest equivalent could arguably be the Israeli-built Merkava, which is essentially a heavy tank that can also carry troops. In the case of the T-15 however, it is far more of a heavily armed and armored troop carrier.