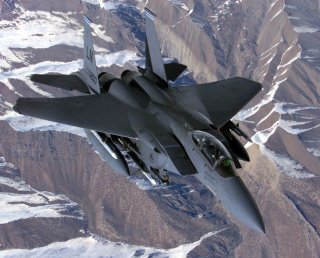 Despite Russian claims that it has pulled some of its forces back from the border of Ukraine, over 100,000 troops remain and could be poised to invade at any time. In response, the U.S. European Command announced earlier this week that it sent an additional eight United States Air Force F-15 fighter jets to Poland.

"More American F15 fighters landed today at the base in ask. 8 machines will join those that came to Poland last week. As part of the mission #NATOAirPolicing, we care for security in the region," Mariusz Baszczak, the Polish minister of defense, posted on social media while sharing images of the aircrafts' arrival.

The additional jets will join an unspecified number of F-15s that were deployed to Poland last week.

"F-15 Eagles from the 48th Fighter Wing at Royal Air Force Lakenheath, U.K., will work alongside the Polish and Danish F-16 aircraft already executing NATO's Air Policing mission from Siauliai Air Base, Lithuania," U.S. European Command said in a statement. "The extra fighters will bolster readiness and Allied deterrence and defense as Russia continues military build-up in and around Ukraine. The aircraft plan to work with other Allies throughout the region practicing air-to-air and air-to-ground training maneuvers in addition to the supporting the enhanced Air Policing (eAP) mission."

"The deployment of U.S. F-15s to Poland elevates the collective defense capabilities on NATO’s Eastern flank and the enhanced Air Policing mission," explained Gen. Jeff Harrigian, Commander of Allied Air Command and U.S. Air Forces in Europe and Africa. "The commitment of U.S. aircraft and Airmen demonstrates the solidarity of the Alliance, as we continue to work together in unity to execute our defensive mission."

In addition to the deployment of the F-15s to Poland, the Air Force announced this week that it had deployed four Cold War-era B-52 Stratofortress bombers back to the UK. The aircraft, support equipment, and personnel from the 5th Bomb Wing, Minot Air Force Base, North Dakota arrived at Royal Air Force Fairford on February 10 to execute the long-planned Bomber Task Force mission, a regularly-scheduled U.S. European Command and U.S. Strategic Command joint mission series.

Through their rotation, the B-52s will operate from RAF Fairford and will integrate with partners and allies, the U.S. Air Force announced. Such bomber rotations, which have regularly occurred throughout Europe since 2018, maintain readiness and further reinforce the U.S. commitment to NATO allies and coalition partners.