To Address Climate Change, Democrats Must Embrace The Future Of Energy Policy 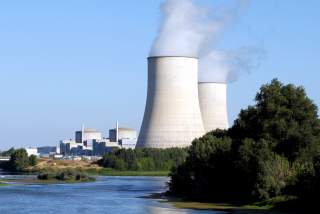 Enter the Oval Office in December 1969 and you might notice — hanging on the wall, just to the right of President Nixon’s Wilson desk — the iconic “Earthrise” photo. It was taken from lunar orbit exactly a year earlier by Apollo 8 astronaut William Anders.

But that photo came down at some point in 1970, perhaps around the same time Nixon gave a speech ending NASA’s privileged budgetary status and lowering America’s human spaceflight ambitions. As John Logsdon of The Planetary Society has written, “Nixon apparently did not want to be reminded of what remarkable things human explorers could accomplish as he made the decisions that would keep humans in low Earth orbit for the next half-century.”

In a lovely coincidence, 1970 may have also been the year that American started becoming less future-oriented. In my recent The Week column, I cite a recent study by Yale University economist Ray Fair that highlights a steady decline in US infrastructure spending as a percent of GDP beginning that year. This was also a period during which the federal government started running big budget deficits. Fair argues the two occurrences reflect a sustained change in national attitude: “The overall results suggest that the United States became less future oriented beginning around 1970. This change has persisted.”

The logic here: Fixing your roof while the sun is shining and curbing spending before the bill collector calls require some foresight and the ability to place the current you in the shoes of future you. And not only have those trends identified by Fair continued until today, the overall lack of future orientation seems to have worsened given the economic nostalgia infecting our politics.

Some Democrats might cite the party’s focus on climate change as powerful proof of its future-focused orientation. (Polls show it a middle-of-the-pack issue among voters.) And, indeed, wanting to take bold action today toward solving a problem whose worst impacts might be decades away is future-focused thinking. That, just as much as wanting to reform entitlements now before an adverse market reaction forces action later.

Yet climate approaches that reject nuclear power seem past-focused — including an obsession with accidents such as Chernobyl and Three Mile Island — rather than future-oriented. They also too frequently echo teen activist Greta Thunberg’s dismissal of “fairy tales of eternal economic growth.”

But retreating from technological advance and economic growth is no way forward. For instance: A recent paper looks at the unintended effects of Japan ceasing operation of all nuclear power stations after the Fukushima Daiichi nuclear accident. Researchers found that replacing nuclear power with more expensive fossil fuels led to higher energy prices and a reduction in energy consumption, “which caused an increase in mortality during very cold temperatures” and “contributed to more deaths than the accident itself.”

James Pethokoukis is the editor of the AEIdeas and the DeWitt Wallace Fellow at the American Enterprise Institute.