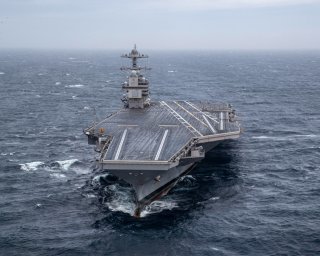 The Navy’s top sailor recently commemorated the centennial of American airpower at sea. During a speech given at Norfolk, Virginia, Chief of Naval Operations (CNO) Adm. Michael M. Gilday explained why the aircraft carrier is vital to the United States military and, by extension, American foreign policy.

“Perhaps no single military platform distinguishes what our nation is and what it stands for more than the aircraft carrier. For 100 years, it has answered the call to service around the globe, and it has borne the burden of a long struggle year-in and year-out of preserving free and open seas and ensuring great-power peace in our world.”

The CNO briefly explained the history of U.S. Navy seapower, noting that “just over two centuries ago the centerpieces of the United States Navy were the original six frigates. This included the USS Chesapeake, 38-gunned, wood-hulled, three-masted heavy frigate built just across the river in Portsmouth.”

Less than a century later, however, “the Norfolk Navy Yard produced the first American battleship, the USS Texas, a 6,000-ton, coal-powered, steel-armored ship which represented at the time the pinnacle of American naval design. In less than three decades after that in 1920, a coal-carrying ship sailed into the Norfolk Naval Shipyard and sailed out two years later as the USS Langley, the nation’s first aircraft carrier.”

Those tests evaluate the ship’s hull and superstructure resilience against damage accrued during battle by detonating packages of explosives weighing tens of thousands of pounds underwater near the ship’s hull.

Having come out of the last of these tests in one piece—and indeed, better than the Navy expected—the USS Gerald R. Ford is approaching regular service with the Navy.

Admiral Gilday also described how the strength of American carrier aviation is being used today by the United States in light of the challenges presented by Russia and China.

“As we gather tonight, the USS Harry S. Truman is protecting the eastern flank of our NATO partners, and the USS Abraham Lincoln, she’s patrolling the Western Pacific. These forces represent the first line of our nation’s homeland defense,” Admiral Gilday said.

“And they are prepared to deter any adversary from using the oceans to attack American or allied shores. Ladies and gentlemen, the United States stands ready to meet the challenges of our time, because we possess the strongest navy in the world. We must endeavor to keep it that way.”