Afghan Forces are Not Losing, They are Disintegrating 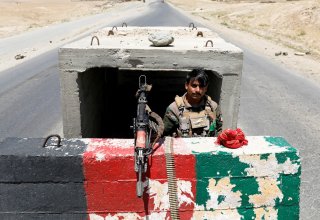 With the benefit of being an insider, former President Hamid Karzai had advised Zalmay Khalilzad, currently the U.S. Special Representative for Afghanistan Reconciliation, back in 2012: “Everything will collapse. The army is rubbish. The government is a puppet.” While Karzai was being frank in private circles, he, for obvious reasons, did not bother to share his concerns with the public. Karzai had no stomach to father more failures than he already had as the figurehead of an inefficient and corrupt government.

Anyone familiar with Afghan history will not pin their hopes on the Afghan security forces (army, air force, and police) to reverse the Taliban’s gains, and save Ashraf Ghani’s government from an imminent disaster. The depleted Afghan army was unable to help Amanullah Khan hold onto his throne in 1929, nor was it able to keep Mohammed Najibullah on the throne in 1992. Both in 1929 and 1992, as the rebels approached Kabul, the army disintegrated.

The withdrawal of U.S. troops has also led to the departure of 15,000 foreign (mostly American) contractors who kept the Afghan government on life support. The contractors were tasked with providing the Afghan forces with advice, ammunition, fuel, and spare parts. The U.S. withdrawal has, therefore, seriously jeopardized the Afghan forces’ capability to hold their own against the Taliban.

One-third of the Afghan Air Force is already inoperable, although it was not working wonders even when it was operating at full capacity. But the news that one-third of its fleet is already inoperable, while there are still some U.S. troops in Afghanistan, is an indication that a much worse situation is in store for the Ghani government once all U.S. troops depart by September.

The U.S. intelligence community believes that the Ghani government could collapse within six months after the U.S. withdrawal. Given the current state of the Afghan forces, it's hard to challenge the U.S. intelligence community's assessment. Almost everyone got it wrong when they predicted the collapse of the Najibullah government shortly after the Soviet withdrawal in 1989. Not only did the Najibullah government survive for more than three years, but it also outlived its chief sponsor, the Soviet Union.

The reason for Najibullah’s survival was massive Soviet economic and military assistance from across the border in Central Asia (the Soviet Union then, unlike the United States now, did not need basing or overflight rights from any of Afghanistan’s neighbors). However, as soon as the Soviet assistance stopped and the Soviet Union was laid to rest in December 1991, the Najibullah government collapsed, and its security forces disintegrated.

Since the United States started withdrawing, scores of provincial districts have fallen to the Taliban, in many cases, without a single shot being fired. Conspiracy theorists have busied themselves with purporting that the Ghani government, in collusion with the United States, is handing over to the Taliban control of the countryside, especially in the north of the country, according to some secret plan.

Ghani government officials conveniently label their collective failure as “tactical retreats.” They are trying in vain to instill some hope in a frightened Afghan population by announcing that the Ghani government is going to reverse the Taliban’s gains shortly. The Ghani government is also employing its go-to weapon, namely anti-Pakistan propaganda, at full force to divert attention from its own failures.

Both the conspiracy theorists (perhaps unknowingly) and the Ghani government officials (knowingly) have it wrong. The truth is much simpler. The Taliban are winning; they are winning at a pace that has surprised many. But the Afghan forces are not losing either. They are simply disintegrating. The soldiers are laying down their weapons, changing to local attire, and disappearing into the countryside. In some areas, the Afghan forces have volunteered their services to the Taliban, or sought safety in neighboring countries.

Afghan forces are not disintegrating only because of a lack of supply. There have been instances, like recently in the Narai district in Kunar province, where well-kept ammunition depots were captured by the Taliban. One can blame lack of supply (given that the Taliban control almost all the major highways and the dysfunctional air force is unable to supply faraway garrisons and districts) in some cases, but how would one explain the Taliban's capturing of district after district without a single shot being fired?

There are many reasons why the Afghan forces are disintegrating. First, the Afghan forces are not motivated to fight. Most have joined the military to earn a living due to the widespread unemployment in the country. Second, the Afghan forces are very poorly trained and led by unqualified officers, who mostly have attained these positions because of their political connections rather than merit. Third, corruption at higher levels of the Afghan military has further depleted the fighters’ morale, if there was any at all. Funds intended for fuel, military supplies, and pensions are diverted on a regular basis to corrupt officials' pockets at the top.

Fourth, the families of many high-ranking Afghan officials such as Ghani and his National Security Advisor Hamdullah Mohib (who both have gotten married to foreign nationals) reside abroad. It is a common practice for Afghan officials to have family ties abroad as insurance against instability in Afghanistan. If things do not work out for them in Afghanistan, they can retire to the safety of the outside world. Instead of fighting for a corrupt government and getting killed, Afghan forces are laying down their arms and letting the Taliban take over.

The disintegration of the Afghan forces has prompted the Ghani government and regional warlords to recruit local militias in the fight against the Taliban. Arming local militias, however, entails serious risks. First, if and when the right time comes, it will be a daunting task to disarm and demobilize the militias. Second, the militias are not answerable to anyone but their immediate commander(s), and thus their presence will lead to further lawlessness and chaos. That being said, the Ghani government, which resembles a sinking, has limited options and will resort to any means to ensure its survival.

In addition, continued U.S. airstrikes against the Taliban will likely lead to harsh reprisals from the Taliban against their local opponents. Having captured a considerable portion of the countryside, the Taliban are turning their attention to cities now to further tighten the noose around the Ghani government’s neck. It is only a matter of time before carnage will find its way to almost all major Afghan cities, including Kabul.