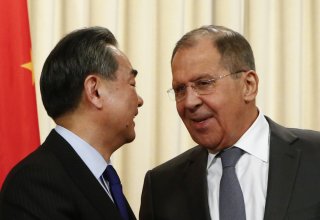 Foreign ministers from Iran, Pakistan, Tajikistan, Turkmenistan, and Uzbekistan met in Tehran on Tuesday for a conference regarding the future of Afghanistan and the actions the countries could take to improve conditions there.

In his remarks, Mokhber blamed the Afghanistan crisis on the United States, which he accused of helping to aid the rise of ISIS’s local affiliate branch, ISIS-K, in order to undermine the Taliban.

While Mokhber argued that the Taliban takeover had represented a “defeat of American policies” in Afghanistan, he suggested that the United States would continue to pursue them elsewhere in the region.

Guterres’s remarks were less partisan and emphasized cooperation. The UN chief underscored the necessity for engagement with the Taliban, arguing that an “epic humanitarian crisis” would follow if international aid to the country ceased. Guterres stopped well short of endorsing the Taliban government, however, warning that human rights violations had continued under its rule.

Following the opening statements, the seven foreign ministers entered a closed-door session. The joint statement that emerged from this meeting praised the conference and indicated that another one would follow. It also provided an outline of the group’s priorities in Afghanistan, including through the provision of humanitarian aid, with the ultimate goal of maintaining the country’s stability. The participants noted that a collapse or an ethnic civil war in Afghanistan would inevitably have significant ramifications for the country’s neighbors because of regional instability and refugee outflows.

The Chinese foreign minister indicated that the group’s next meeting could take place in Beijing, although no timeframe was provided. China’s Xinjiang Uygur Autonomous Region shares a roughly fifty-mile border with Afghanistan to its northeast.

The Taliban’s outreach to the international community, and its pursuit of international recognition, have been regarded as positive signs that the group is hoping to avoid the status of a pariah state. The first Taliban government, controlling most of the country from 1996 until its downfall in 2001, was ultimately recognized by only three countries—Pakistan, Saudi Arabia, and the United Arab Emirates—before its downfall in 2001. Although no nation has recognized the new Taliban government, Pakistan and Iran have both cultivated ties to it, and China has suggested its intent to commercially integrate Afghanistan into its Belt and Road Initiative.