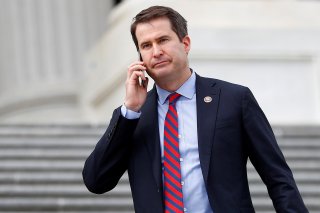 Speaker of the House Nancy Pelosi (D-Calif.) condemned on Wednesday a trip that two House representatives took to the Kabul airport, which is where thousands of Americans remain pending evacuation.

Earlier in the week, it emerged that Reps. Seth Moulton (D-Mass.) and Peter Meijer (R-Mich.) had secretly flown to Afghanistan to evaluate the U.S. withdrawal effort, prompting anger from the White House, State Department, and Defense Department.

Critics of the representatives highlighted the fact that their presence required resources to be diverted to protect them and update them on the situation. The trip was conducted without consulting the Defense Department, which allegedly learned of their presence after their plane was cleared to land at the airport.

Moulton and Meijer’s critics have also noted that their presence took up airplane seats which could have been used to evacuate more people, although the two representatives have denied this, noting that they were sitting in empty staff seats rather than with passengers.

Pelosi described the incident as “deadly serious” and suggested that their committee assignments could be affected by the trip.

In a joint statement, the two representatives, both U.S. military veterans who served in the Iraq War, defended their decision and argued that further oversight was needed.

The Defense Department has reported that nearly twenty thousand people were evacuated from Afghanistan in the past day, and President Joe Biden has indicated that the United States intends to adhere to the August 31 withdrawal date demanded by the Taliban. However, Moulton and Meijer emphasized in their statement that the August 31 withdrawal would be logistically impossible. “After talking with commanders on the ground and seeing the situation here,” the statement reads, “it is obvious that because we started the evacuation so late, that no matter what we do, we won't get everyone out on time, even by September 11.”

Pentagon spokesman John Kirby described the trip as a “VIP visit” and noted that their presence “certainly took time away from what we had been planning to do that day.” Kirby indicated that the representatives had not consulted Secretary of Defense Lloyd Austin before the trip.

However, House Minority Leader Kevin McCarthy (R-Calif.) defended Moulton and Meijer in his own press briefing, citing the frustration of the two veterans with the confusing and chaotic situation at the airport.

“It’s not the best idea to go there,” McCarthy said, “but I understand their frustration.”