Africa: The Biggest Winner or Loser Thanks to Climate Change? 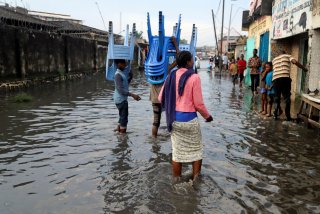 In school, we learnt that the tropical zone is defined as the hot region of our planet – between the tropics of Cancer and Capricorn. But the more important climatic boundary between tropical and temperate climates is bounded by the slightly larger region covering about 30 degrees latitude either side of the Equator.

The tropics are characterised by warm to hot temperatures throughout the year. Importantly, latitudinal changes in temperature are small compared with regions outside the tropics. Rainfall is largely abundant but it becomes increasingly seasonal with distance from the equator.

The tropical zone is expanding poleward at a rate unprecedented in perhaps hundreds of thousands of years. This has been referred to as Earth’s bulging waistline.

Relative to the 1979 baseline, the tropics have expanded poleward 56km to 111km per decade in each hemisphere. If this rate continues then we may witness an expansion of 850km by 2100. This is roughly equivalent to the distance from Rome to London.

Expansion of the tropics has massive implications for societies, economies and the natural world as Earth’s climatic zones shift poleward. Both human and natural systems will be forced to adapt to new climatic conditions. In particular, there will be unprecedented heat for hundreds of millions of people in the tropics as global warming accelerates.

Africa has the largest tropical footprint among the continents and is, therefore, severely threatened by expanding tropics. Over 80% of the continent lies within the band 30 degrees either side of the equator. African nations will be particularly vulnerable due to their lower socioeconomic development.

The poleward edges of the expanding tropics contain a large region dominated by high pressure atmospheric systems throughout the year. This dry subtropical zone is associated with the world’s warm deserts and is also shifting poleward as the tropics grow.

There is growing concern about the poleward shift of this dry subtropical zone into highly populated regions that have generally enjoyed a more temperate climate. Threatened regions include southern California, the Mediterranean Basin countries and southern parts of Africa and Australia.

A compelling study found that the dry subtropics may expand by as much as 30% by 2100. This will have dire consequences for water security, food production and biodiversity in many adjacent temperate regions.

The Mediterranean climates of the world are experiencing drying and warming as the edge of dry subtropical zone - located near 30N and 30S shifts poleward. Steve Turton

The effects of latitudinal shifts in climate zones will be most obvious in populated temperate regions outside the tropics, such as southern Europe and southwestern parts of the US.

Impact on climate and species

The Intergovernmental Panel for Climate Change’s rainfall projections for Africa this century are consistent with an expanding tropics. Projections include declining rainfall in the north and south – but particularly for the southwest of the continent. Regions nearer the equator and the Horn of Africa may expect more rainfall.

Africa’s temperature projections for this century are alarming, especially for the high “business as usual” emission scenario. The entire continent will warm up with marked temperature increases projected for the interior. Hundreds of millions of people will be subjected to unprecedented average temperatures and more prolonged heat waves.

For mega-cities located in the zone of maximum heat like Lagos in Nigeria and Kinshasa in the Democratic Republic of Congo, there are simply no existing climate analogues of what their climate may be like by mid century.

Humans will not be the only ones being effected. Many plant and animal species are moving poleward in an attempt to stay within their preferred environmental conditions. A classic example is butterflies.

However, many species – especially in the tropics – may not be able to keep pace with the changing climatic conditions and could experience population declines or extinction.

Species surviving on high mountain tops like gorillas for example – where there is limited higher cooler space available – are particularly vulnerable to global warming. They also face an uncertain future.

Running out of land

As the tropics move poleward, the dry subtropical zone will begin to squeeze adjacent, wetter temperate zones in both northern and southern Africa. These are highly important population and agricultural areas and also contain two globally significant “biodiversity hotspots” – the African part of the Mediterranean Basin and the Cape Floristic Region at the south-western extremity of South Africa.

For both these regions there are simply no suitable land areas for ecosystems and their species to move poleward to keep pace with projected warming and drying trends. The Mediterranean Sea to the north and Southern Ocean to the south, provide formidable boundaries for the future movement of many land species. In the case of the Cape Floristic Region, the next land stop is frigid Antarctica.

We desperately need to work out ways to drastically reduce our global greenhouse gas emissions. If we are to slow, or preferably reverse, the expansion of the tropics and overheating of low latitude regions, we need to act or there will be serious consequences for all.