After Many Delays, the U.S. Navy’s Newest Aircraft Carrier is Set to Go to Sea 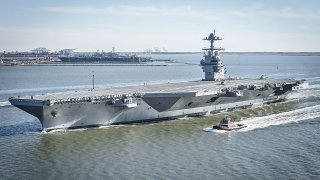 The Navy’s newest and largest warship, the enormous Gerald R. Ford-class aircraft carrier, will soon take to the sea on its first combat deployment following shock trials and other types of operational testing.

“Everything is on track. We’re still looking to get out as scheduled after the six-month availability. No big show-stoppers that they’ve come across at all,” Rear Adm. Gregory Huffman, the commander of Carrier Strike Group 12, explained to USNI News. “So very, very positive news coming from the captain and from the shipyard. And then as we come out of that, I think we’re going to be set very well to get back in that operational mindset and get ready for the deployment.”

Huffman will command the Ford on its first at-sea deployment. The nuclear-powered aircraft carrier is the first of the planned ten carriers that are the world’s most technologically advanced.

The Ford-class incorporates quite a few advanced designs intended to increase sortie tempo by about a third. Many of the improvements rely on automation for quicker, less manpower-intensive operations. For example, the class’ Advanced Weapons Elevators, used to raise ordnance to the flattop’s deck, are powered by magnetic motors rather than traditional cable elevators.

The Ford-class also features an electromagnetic aircraft launch system rather than the older steam-powered catapults. Though the system has been criticized for unreliability, it requires less manpower to operate and could offer real launch advantages over older steam catapults.

The Ford ships also feature a new Advanced Arresting Gear, used to slow down aircraft landing at sea rapidly. Compared to older arresting gear, the new AAG allows for a broader array of aircraft landing, including lighter unmanned aerial vehicles, and is safer and more reliable than traditional arresting gear.

Despite the criticism the first of the Ford-class has sustained, one bright spot has been its performance during shock trials. The tests included the detonation of forty thousand pounds of explosives near the ship. It validated the hull’s robustness and the resilience of the Ford’s onboard radar and other electrical systems.

The Navy designed the Ford-class from the outset, knowing that future technology would have to be incorporated into the design. This way it will be “easier to adapt and flex as new equipment comes online,” Huffman explained.

“As we start looking at what new air wing composition is going to be and new technologies are presented, it will be much easier to incorporate that into the Ford and then get back into an operational status more rapidly than if we had to take an older ship and put it into a dry dock and completely reconfigure very, very fundamental aspects of the ship,” Huffman said.

The Ford is expected to remain in service for half a century, thanks in part to the Navy’s design approach. So by that calculus, this first Ford-class carrier would face retirement in 2071.