Against All Odds: More Than Javelins Saved Ukraine From Destruction 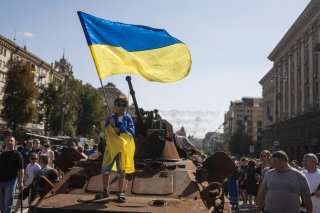 Why do smaller, seemingly less capable armies at times prevail against all odds? Is it luck? Tactical proficiency? External support? Perhaps none of these. Perhaps it is “heart.”

Heart, or unrestricted, passionate devotion to country and family and the need to survive may best explain the reasons for Ukraine’s unexpected success against a purportedly superior Russian military juggernaut.

In an effort to explain how inspiration and will to fight can affect the trajectory of wars, Mike Mears, a former high-level leader in the intelligence community, spoke to The National Interest about several psychological and neurological phenomena of great consequence to the human soul, cognition, intention, and, ultimately, decisionmaking.

Mears, who previously worked as the director of human capital at the Central Intelligence Agency, cited a famous text by Noble Laureate Daniel Kahneman, “Thinking, Fast and Slow,” a study of the emotion and science behind human decisionmaking. A large element of this, Kahneman explains, involves a significant and varied mix of logic and less calculable or more subjective phenomena such as emotion, inspiration, spirit, or even instinct. Mears cited this “logical brain” and posited that it was indeed accompanied by an equally if not far more powerful “automatic” brain informed by passion, feeling, intuition, or moral and philosophical sensibilities.

Perhaps Kehenman, and Mears’ reading of his text, comes close to finding words for these inexplicable human traits and faculties including inspiration, intensity, hopes, and dreams.

“There's the logical brain, then there is what I call the automatic brain, which is basically everything else … our dreams, hopes, habits, and so forth. So [Ukrainian president Volodymyr] Zelenskyy was taking that approach, and I think it's a good one to use in leadership where you've got to engage the automatic brain, but you also have to engage that logical brain. We forget that quite often, after giving the logical reason for a change, the change falls flat and we don't understand why,” Mears said.

Mears’ discussion of Zelenskyy reminds us of an ancient, yet timeless text which succeeded in capturing and informing the minds of millions throughout the centuries with ideas about the human condition. In the famous text “The Republic,” Plato outlines what’s known as the “tri-partied” model of the human soul in Book X, something which consists of a “beast”—or base desires and appetites … “rational principle”—which is our distinctly human ability to reason, and the “spirit” or “EIDOS”—a passionate love of learning which inspires and motivates the philosopher king. Should we draw upon this classic Platonic model, it would seem that pure “rational principle” alone might be insufficient to inspire the kind of intense devotion shown by Ukrainians. It also requires the “spirit,” that lesser understood yet arguably more powerful element of human motivation. While drawing upon rationality in many key respects, Zelenskyy exhibits and appeals to “EIDOS.”

In short, Zelenskyy strikes a deeply entrenched, defining “chord” woven into the soul of man, responsible for inspiration, motivation ... and even a willingness to face death.