Against Russia and China, Has the MQ-9 Reaper Drone Met Its Match? 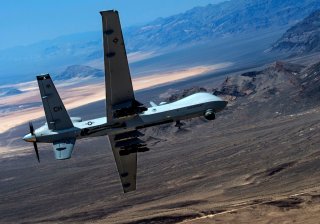 The future of the Air Force’s medium-altitude MQ-9 Reaper drone continues to generate substantial debate as to how it can best support the United States in a changing threat environment.

The thrust of the debate concerns the platform’s survivability: namely, is the larger, non-stealthy Reaper viable enough to remain effective in the kinds of high-end, contested environments where U.S. adversaries possess advanced air defenses and long-range sensors?

Undoubtedly, the Reaper has performed spectacularly and in an impactful way for many years, particularly when it comes to counterinsurgency and counterterrorism missions. For years, the Hellfire-armed Reaper drone has been effective in killing terrorists with precision strikes and maintaining that crucial intelligence, surveillance, and reconnaissance (ISR) “persistent stare” above high threat areas.

Addressing members of Congress during a House Appropriations Subcommittee on Defense budget hearing, Chief of Staff of the Air Force Gen. Charles Brown spoke about having the right mix of capabilities as it relates to maintaining and upgrading the current fleet and keeping pace with new threats. Brown was clear that the Reaper will remain part of the U.S. inventory, explaining that there will still be a critical role for the Reaper to play in permissive environments.

“The threat in the Middle East has been permissive, yet we will still need technology for less permissive environments,” Brown told lawmakers.

At the same time, some lawmakers expressed concern that the Air Force has been cutting its budget for the Reapers too early, effectively compromising a key capability for the force. “Africa is permissive, South America is permissive, and most of the world is permissive,” Rep. Ken Calvert (R-CA), ranking member of the House Appropriations Subcommittee on Defense, told senior Air Force leaders.

Brown and Kendall were clear that, at the moment, U.S. combatant commanders had enough Reapers to meet their mission requirements and that the capability will remain in the force. Yet senior service leaders also made clear that weapons developers need to continue to prioritize new, more-survivable ISR platforms and technologies sufficient to operate successfully in “contested” environments (such as the Pacific or Eastern Europe where Russian and Chinese air defenses make the Reaper more vulnerable).

Of course, the Air Force has been working to maintain the Reaper’s effectiveness, by, for example, integrating a universal weapons interface to expand its arsenal and attack capabilities. Modern Reapers can now fire the AIM-9X Sidewinder air-to-air missile as well as the AGM-114 Hellfire, 500-pound laser-guided GBU-12 Paveway II, and even GPS-guided air-dropped bombs such as the GBU-38. This clearly expands its mission envelope and the kinds of warfare scenarios in which it might be effective.

Also, last year, General Jeffrey Harrigian, commander of U.S. Air Forces in Europe, explained that there were tactical adjustments which could be made to improve the Reaper’s survivability, such as by flying “less predictable” flight paths. Also, fast-advancing sensor technology in the realm of sensor ranges and image fidelity might enable the Reaper to successfully conduct ISR missions in high-threat areas at higher and, therefore, much safer altitudes.

Nonetheless, over time, the Air Force is right to prioritize smaller, stealthier, and better-networked ISR technologies to ensure crucial missions can continue in extremely high-threat, contested environments. The Reaper’s time is likely numbered.