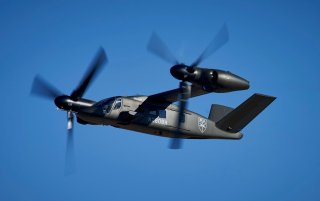 Autonomy and “fly-by-wire” technology are likely built into the Lockheed-Sikorsky Defiant and Bell V-280 Valor Future Long Range Assault Aircraft offerings. Both of these are now being evaluated by the U.S. Army as potential platforms to upgrade the branch’s aviation capabilities into the next decade and beyond.

Fly-by-wire technology can be a vital element of aircraft safety, particularly in the event that a pilot is incapacitated. Advanced algorithms equipped with extensive databases of terrain maps, weather, and navigation information can help an aircraft correct its flight path without human intervention. Autonomous aircraft features could change the aviation safety equation by relying on AI-enabled systems to organize and assess incoming sensor data from separate streams of information, analyze variables in relation to one another, and make determinations to execute rapid in-flight adjustments.

Years ago, Future Vertical Lift developers envisioned this kind of technology as a man-machine interface, meaning computers would perform procedural functions to ease the cognitive burden placed on human pilots. Advanced autonomy was analyzed for FVL in the context of a requirement called “controlled flight into terrain,” a computer program with automation and mapping technology designed to build-in flight path redundancies and ensure aircraft safety in environments with buildings and uneven terrain.

Survivability technology is also a critical dimension to safety, yet many of the details related to these technologies are not available publicly for security reasons. However, for years the U.S. Army has been working on laser jammers designed to locate and jam incoming missiles to throw them off course. One system, called the Common Infrared Countermeasure (CIRCM) uses infrared sensing to jam incoming missiles. Other survivability systems involve advanced long-range sensors that can locate approaching threats from far away, acoustic sensors to detect the sound of incoming small arms fire, optical sensors that can spot muzzle flashes from a weapon firing, and even focal plane array technology to search for heat signatures emanating from weapons, vehicles, or human combatants.