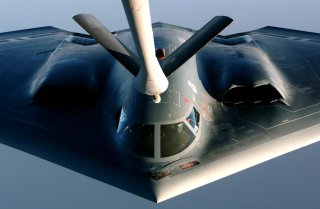 The Air Force and Northrop Grumman are integrating a cutting-edge crypto modernization and Radar Aided Targeting System (RATS) into its stealthy B-2 bomber as part of an intense, wide-ranging series of upgrades to the aircraft. Once completed, it will ensure that the bomber can sustain operational functionality in modern, high-threat environments against technologically sophisticated adversaries.

RATS will, among other things, better enable the B-2 to deliver the new, upgraded nuclear-capable B61 Mod 12 weapon.

The B61-12 adds a new level of precision targeting and consolidates several different kinds of attack options into a single weapon. Instead of needing separate variants of the weapon for different functions, the B61-12 can undertake earth-penetrating attacks, low-yield strikes, high-yield attacks, above-surface detonation, and bunker-buster options in a single weapon.

Given its vast capabilities, Air Force officials have begun referring to the upgraded B61-12 as the “All Up Round.”

“The unrivaled capabilities of the B-2 make it the only long range, penetrating stealth bomber currently in the U.S. arsenal,” said Shaugnessy Reynolds, vice president and B-2 program manager at Northrop Grumman, said in a written statement. “Committed to continued modernization of the B-2, we’re leveraging our company’s innovation in digital engineering and its decades of leadership in designing and maintaining low observable platforms to keep the B-2 Spirit mission ready.”

The B61-12 has previously been integrated and test-dropped from an Air Force B-2 bomber as part of a fleet-wide stealth bomber upgrade which includes new radar-evading board sensors, faster computer processing, and new weapons adaptations.

Streamlining the different nuclear bomb variants into a single weapon brings a host of advantages, including the ability for weapons-carrying aircraft such as a B-52 Stratofortress or B-2 bombers to arm themselves with a greater number of bombs. For example, if each individual weapon offers additional attack alternatives, then pilots can tailor or choose between a wide range of strike options with fewer onboard bombs, therefore carrying more of them for each mission. This would prove useful in the event that a multi-faceted or large-scale nuclear attack became necessary.

While the idea of a tactical or “limited” nuclear strike remains a subject of passionate debate, Air Force thinking aligns with the idea that simply giving commanders and air crews a wider range of options strengthens the overall U.S. deterrence posture. Some further believe that it sends a clear message to potential adversaries that any use of nuclear weapons should and will be met with a massive, catastrophic response, and that the United States has the means to deliver it. For instance, technology enabling low-yield, earth-penetrating, or contained “area” detonation nuclear options might dissuade a potential attacker from risking a tactical or low-yield nuclear strike.

As for Northrop’s discussion of crypto modernization, a company statement says it is designed to further improve the communications security of various high-frequency transmissions.