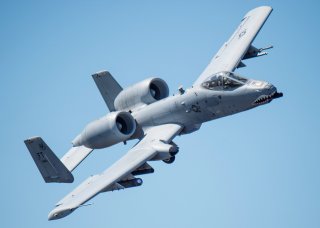 The Air Force is headed for yet another defeat in its long-running quest to retire the A-10 Thunderbolt II attack aircraft.

The House of Representatives passed a compromise version of the fiscal year 2022 National Defense Authorization Act (NDAA) on Tuesday night. As reported by Defense News, the compromise bill includes senate language that would prohibit the U.S. Air Force (USAF) from retiring its aging stock of A-10 aircraft in 2022. Whilst retaining the A-10, the House-passed NDAA would allow the USAF to retire over two dozen KC-10 Extender and eighteen KC-135 Stratotanker aerial refueling aircraft by 2023. According to the outlet Breaking Defense, additional divestments in the bill include forty-seven F-16C/D and forty-eight F-15C/D fighters.

Introduced in 1977, the A-10 Thunderbolt II “Warthog” is USAF’s staple close air support (CAS) fighter. The Warthog is among the structurally toughest aircraft of its kind; built with numerous fail-safes and redundancies, the plane is designed to keep flying even after suffering catastrophic damage. The aircraft is built around its iconic GAU-8 Avenger cannon, which remains an accurate and highly potent weapon against many forms of heavy and light armor.

According to Boeing, over 280 A-10 models remain in service with the USAF, Air Combat Command, Air Force Reserve, and the Air National Guard. Repeatedly thwarted by Congress in its attempts to completely phase out the forty-four-year-old warplane, the USAF has planned a wide range of cockpit, weapons, and avionics upgrades intended to keep its remaining Warthogs in the air into the 2040s. The NDAA also requires Air Force Secretary Frank Kendall to submit a report to Congress by early 2022 on the status of the A-10 re-winging program.

The service has long sought to retire the aging Warthog, which USAF officials argue would offer limited battlefield value in a pitched great-power conflict with Russia or China and is holding up funds that could go toward valuable next-generation platforms. “If it doesn’t threaten China, why are we doing it?” Kendall said at the Reagan National Defense Forum. Kendall singled out the advancing age of the service’s fleet as an “anchor holding back the Air Force,” adding that the service “has to get rid of some of those aircraft so we can free up resources and get on with modernization.” The USAF was downgraded from “marginal” to “weak” in the Heritage Foundation’s annual index of U.S. military strength for 2022. The Heritage Foundation index found that the Air Force’s modernization programs, while “healthy,” are struggling to keep pace with the service’s rapidly aging inventory.

The House-passed NDAA is now being evaluated by the Senate, which could take up the bill in the coming weeks.