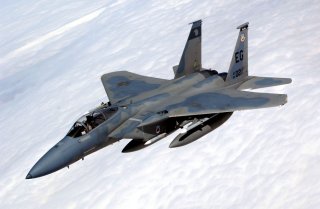 It is called the Legion Pod, an Infrared Search and Track (IRST) targeting technology recently tested by the Air Force in Alaska during the Northern Edge 2021 wargame.  The emerging Legion Pod, now reported by the Air Force to be ready for operational service, identifies targets beyond the typical scope of electronically scanned radar by virtue of using an “out-of-band” sensor, or a method of detection outside of the frequency bands employed by standard radar.

The Legion Pod seems like it could involve the ongoing technical maturation of IRST, a targeting system integrated years ago on Navy F/A-18 jets said to be particularly effective in an electronic warfare [EW] environment or a jamming environment.

“IRST pod is an added capability to the warfighter and is proving capable in the dense electronic attack threat environment of Northern Edge,” Maj. Aaron Osborne, an F-15C jet pilot for the 28th Test and Evaluation Squadron, said in an Air Force essay. “While at Northern Edge, I’m using the pod not as a test pilot, but exactly as I would in the [Combat Air Force] or in operations. We’re checking the final boxes of the test plan here before the pod fields and using it with the latest operational flight program.”

A technology of this kind would seem to be particularly impactful due to the rapid emergence of enemy EW attacks, jamming technologies and countermeasures intended to confuse, disrupt or throw off weapons guidance systems and electronic target tracking on fighter jets. Should an F-15 jet be able to find and destroy enemy targets in an electromagnetic environment that is jamming electronic radars, then the jet could likely prevail in an air-to-air engagement. Many weapons guidance systems are also radio frequency reliant and therefore vulnerable to being jammed, such as an Air Force AIM-9x Sidewinder missile or AIM-120D AMRAAM missile.

This circumstance is part of why the Air Force and Raytheon have been working on countering enemy countermeasures when it comes to sustaining weapons guidance and targeting in the event of an EW jamming attack. One such technique now being developed could generally be described as “frequency hopping,” meaning weapons targeting systems can shift from a “jammed” frequency to an open one, therefore continuing on course to a target. This kind of advanced counter-countermeasure type of technology is increasingly taking center stage as newer kinds of weapons in the electromagnetic spectrum.