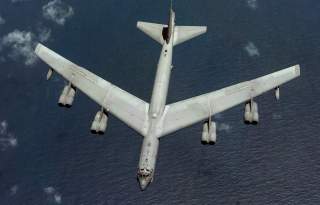 In August 2018, Aviation Week reported that Col. Lance Reynolds gave a briefing at Tinker Air Base, Oklahoma in which he unveiled a proposal for an upgraded B-52J model of eight-engine bomber—no less than sixty-three years after the Cold War icon entered service with the Air Force.

The B-52 may have a flaming cocktail and a rock band named after it, but its age was criticized in the 2016 presidential debates. There’s no denying that the huge strategic bombers measuring half the length of a football field would have little hopes of penetrating the airspace of a near-peer opponent mustering advanced jet fighters and long-range surface-to-air missiles.

But while that was the game plan in the Doctor Strangelove era of B-52 operations, the U.S. Air Force’s has found many new uses for its seventy-six remaining B-52Hs, which are nicknamed Big Ugly Fat Fellows. The BUFFS can lug huge payloads across oceanic distances and launch them from beyond the range of enemy air defenses using munitions ranging from glide bombs to Harpoon anti-ship missiles to even nuclear-tipped AGM-86B Air Launched Cruise missiles for the most calamitous scenarios. Meanwhile, B-2 and upcoming B-21 stealth bombers would handle missions requiring penetration of enemy airspace.

For operations in more permissive threat environment, such as in a counterinsurgency conflict, B-52s can orbit high above battlefields for hours upon hours, while its five-person crews delivers precision air strikes with GPS-guided JDAM or laser-guided Paveway smart bombs using target data from drones, and forward observers on the ground. It can also use a wing-mounted AAQ-33 Sniper pod, which combines an infrared sensor, an electro-optical camera and a laser targeter for day and night-time operations. In fact, B-52s have played a major role in the air wars against the Taliban, Al Qaeda, ISIS and even a violent battle involving Russian mercenaries in Syria.

The proposed B-52J upgrades described by Colonel Reynolds mostly encompass reliability and convenience improvements rather than major new capabilities. They include upgraded flight recorders, a revised ejection seat, relocation of the wing-mounted Sniper pod, and full conversion of old “steam-gauge” instruments to a digital glass cockpit displays. These is because the globe-spanning bomber is set to remain in service through the 2040s or even fifties—totaling a century of service.

The B-52s may also receive a modernized defensive suite. While a BUFF would strive to remain far away from enemy fighters or SAMs, Russia and China have developed specialized very-long range missiles such as the 40N6 on the S-400 SAM system (250 miles) and the air-to-air R-37. While lacking the speed, agility and sensor resolution to shoot down fighters at maximum range, these missiles could pose a threat to airliner-sized tankers, AWACS radar planes . . . and B-52s. A better defensive suite would give them additional survivability versus these long-range threats.

The B-52 has also been suggested as a likely candidate for an aerial Active Protection System designed to shoot down incoming missiles using kinetic projectiles, guided missiles or even a laser. In fact, Air Force interest in increasing the B-52’s electrical generation strongly hints at possible laser-armed BUFFs.

However, many dramatics upgrades to the B-52 have already been set in motion prior to the unveiling of the B-52J concept—notably, the quest for new fuel-efficient engines and a bewildering array of new potential weapon systems.

Since the 1990s, Air Force studies have noted that replacing the B-52’s old TF33 turbofans with more fuel-efficient modern types could pay for itself in just a decade’s time. The TF33s also require a $2 million overhaul every 2,000 flight hours. In December 2017, the Air Force laid out new specifications calling for a 40 percent decrease in fuel consumption per flight hour, hardening versus nuclear blasts and electronic warfare, digital engine controls (FADEC) with wireless access, and increasing electrical output to 400 to 500 KVa, giving the BUFF more electricity to power new weapons, sensors and defensive systems.

As the B-52 will likely serve for multiple decades, re-engining is not only a no-brainer but virtually required for service beyond 2030, but the Congressional funding to implement it has yet to materialize. Lacking the money, the Air Force is pitching a proposal where savings in fuel costs would go to engine manufacturers after they are installed. However, no specific engines or contractor have been associated with the notional project, which would theoretically be implemented between 2025–2030.

Separately, the Air Force has been gradually upgrading a beast originally built to lug up to seventy thousand pounds of unguided gravity bombs that had to be dropped directly over a target to a missile carrier that can strike at adversaries hundreds of miles away. For example, the Air Force has begun installing a rotary Internal Weapons Bay Unit to allow storage of eight guided weapons in the bomb bay in addition to twelve underwing weapons.

By the early 2020s, the rotary launchers will be certified to fire deadly AGM-158 JASSM and JASSM-ER stealth-cruise missiles—which give the B-52 nonnuclear precision-strike capability at targets over five hundred miles away, or the MALD decoy missile, which in addition to drawing away enemy fire can mount a jammer. A recent avionic upgrade called CONECT has allowed the mid-twentieth century war machines to integrate targeting and sensor data with friendly forces.

A recent article by Joseph Trevithick of The Drive highlights how the B-52 is set play a role in testing, and potentially deploying, no less than four different hypersonic weapons systems being developed by the Pentagon, as well as new nuclear-tipped cruise missiles. Because hypersonic weapons travel more than five times the speed of sound, and can maneuver more evasively than a ballistic missile, they give adversaries very little time to detect and react to them, and have a lesser likelihood of being shot down by missile interceptors. B-52s have also been proposed for conversion into huge stand-off jamming platforms or “arsenal ships” loaded down with long-range anti-aircraft missiles.

Notably, Russia and China are the only other countries to operate similar 1950s-era bomb trucks, the Tu-95 Bear and H-6K, though both types are significantly less capable than the B-52. The B-52’s ability to carry heavy loads over long distances will grow increasingly valuable as Beijing and Washington face off for control over wide expanses of the Pacific Ocean.

It’s important to emphasize that the B-52J and the new engine still haven’t advanced beyond the proposal stage. However, whether or not the Air Force actually funds those specific initiatives, the BUFF will continue to accumulate new capabilities and new missions well into the middle of the twenty-first century.