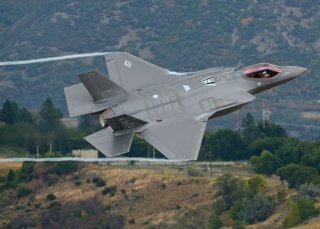 The U.S. Air Force has deployed fifth-generation F-35 Lightning IIs to Germany, it announced in a press release on Wednesday.

The F-35s arrived at Spangdahlem Air Base in western Germany on Wednesday. According to the press release, the aircraft will “bolster readiness, enhance NATO's collective defense posture and further increase air integration capabilities with Allied and Partner nations.”

The Air Force has also deployed eight F-15Es to Lask, Poland and six KC-135 Stratotankers to Ramstein Air Base in Germany.

“We are facing a dynamic environment and this deployment significantly enhances our support to NATO’s defenses,” said Air Force Gen. Jeff Harrigian in a press release on Wednesday. Harrigian is Commander, U.S. Air Forces in Europe and Air Forces Africa and Commander Allied Air Command.

The deployment of the six aerial tankers is crucial to support other forces in the region. F-35s taking off from Germany likely would not have the range to reach Ukraine unrefueled, and would have to fly over territory from several partner nations. They would also have to fly near Belarus, where Russian forces are currently deployed for exercises with the Belarusian military.

Aircraft would likely need to refuel in mid-air or stop and refuel on allied territory in Poland or Hungary. This might greatly enable more “dwell time” and mission effectiveness over Ukraine should F-35s be called upon to support Eastern Europe.

While the Pentagon and NATO have been clear that there are no plans and no intent to attack or challenge Russian forces within Ukraine, the presence of F-35s within striking distance arguably changes power dynamic and strategic calculus in a significant way. It could lead Russia to think twice about any invasion of Ukraine for a number of key reasons.

The deployment of F-35s would be a significant advantage for NATO countries against an advancing Russian ground force. It is unlikely that Russian Su-57 stealth fighters could match F-35s flown by NATO air forces. Russia operates only a handful of Su-57s and is not expected to acquire greater numbers for several years.

Long-range sensors built into the F-35 could strike Russian ground forces from stand-off distances and be equally positioned to quickly destroy Russian fourth-generation aircraft to defend NATO allies. A strong presence of F-35s makes it much less likely that Russian president Vladimir Putin would contemplate an attack on NATO or Eastern Europe.